TORONTO -- Alain Bouchard officially stepped down as CEO of Alimentation Couche-Tard Inc. on Wednesday on the occasion of the convenience store company's annual shareholders' meeting that for the first time in the history of the company took place outside of Quebec, reported the Canadian Press. He has been succeeded by Brian Hannasch. 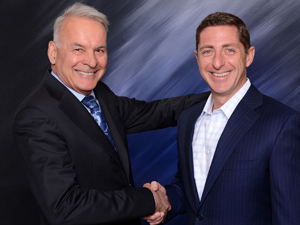 Bouchard, 65, has taken on the previously announced new role as co-founder and chairman of the board, where he intends to devote his energies to determine targets for future acquisitions. Friend and co-founder Réal Plourde, who has been serving as chairman since his retirement in 2011, has surrendered the position to Bouchard.

Hannasch, 48, who until Wednesday had the title of chief operating officer, hopes his arrival will effectively promote continuity.

"I have no reason to change the course," he said. "We will continue to be a disciplined buyer," he said, one that will now have to ensure that daily operations generate enough cash to enable the company to complete future acquisitions.

He also said he intends to learn to speak French.

Meanwhile, despite assertions to the contrary, Couche-Tard has not completely closed the door to the possibility of a stake in Chinese gas station retailer Sinopec, even if it does not intend to set foot in China in the short term, reported The Journal of Montreal.

After speculation spread in August that it might buy into Sinopec, officially known as China Petroleum & Chemical Corp., Couche-Tard released a statement declaring that it had "no plan to invest in the Sinopec placement."

A group of 25 Chinese and other foreign investors took the $16 billion, 30% minority stake.

"We met, but there is no interest on our part in the short term because it does not meet our goals," Bouchard said Wednesday. "But in the longer term, it does not close the door if [we] can [reach] our goals," noting that Sinopec will be launched on the stock market in about 18 months.

At the shareholders' meeting, Hannasch indicated that growth will not only came from acquisitions, said the report.

"Organic growth is a key element of our strategy and cost control is based in the company culture," he said, adding that acquisition must be made at the right price.

Laval, Quebec-based Couche-Tard's network includes approximately 6,250 convenience stores throughout North America, including nearly 5,000 with motor fuel dispensing. Its North American network consists of 13 business units, including nine in the United States covering 39 states and the District of Columbia (under the Circle K brand) and four in Canada (under the Mac's and Couche-Tard brands) covering all 10 provinces.

In Europe, Couche-Tard operates a broad retail network across Scandinavia (Norway, Sweden and Denmark), Poland, the Baltics (Estonia, Latvia and Lithuania) and Russia, with approximately 2,250 stores--the Statoil Fuel & Retail network it acquired in 2012.

Also, under licensing agreements, about 4,600 stores are operated under the Circle K banner in 12 other countries (China, Guam, Honduras, Hong Kong, Indonesia, Japan, Macau, Malaysia, Mexico, Philippines, Vietnam and United Arab Emirates), which brings to more than 13,100 the number of sites in Couche-Tard's network.