DALLAS -- In a deal that forges a 29-state network servicing 1,350 accounts and distributing nearly one billion gallons of fuel annually, Empire Petroleum Partners LLC and Atlas Oil Co. have combined their retail dealer businesses to create a national fuel distributor. 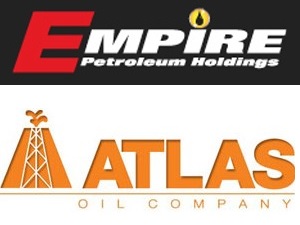 As part of the merger, Sam Simon, chairman and CEO of Atlas Oil, will retain a significant ownership stake in Empire Petroleum and will join its board of directors in an influential role.

"We are pleased to welcome Sam, an industry veteran and successful executive, as our partner," said Hank Heithaus, CEO of Empire Petroleum. "Sam has a long history of innovation and growth, and we look forward to capturing his entrepreneurial energy and vision."

The addition of the Atlas retail business significantly enhances Empire's fuel volumes while strengthening its relationships with its branded partners, including Marathon, ConocoPhillips, CITGO and BP.

Atlas's retail dealer business, which represents less than 24% of Atlas's total fuel volume, will be merged with Empire while its core commercial and industrial segment will remain in place and be strengthened for growth.

"We have always strived for innovation and progression as a company, and our partnership with Empire creates immediate scale and future opportunities," said Sam Simon. "We believe the combination of our retail fuel volumes will fortify Empire's leadership position in the industry and enable us to better serve our customers, employees and suppliers."

As part of the combination, Empire Petroleum will receive additional equity capital from its financial sponsor, American Infrastructure MLP Funds (AIMLP), as well as other

"The Empire partnership was formed in 2011 to bring industry leaders together to create a powerful and lasting fuel distributor," said Bob Hellman, chairman of Empire Petroleum and CEO and managing director at AIMLP. "The addition of Atlas and Sam Simon to our partnership is an important milestone, and we greatly welcome Sam's involvement, guidance and stewardship."

Based in Taylor, Mich., Atlas Oil is a leading fuel supply, logistics and services company delivering comprehensive solutions to customers throughout the distribution lifecycle, from crude oil exploration and production (E&P) companies to refineries, retail gas stations and commercial end users nationwide. It is engaged in all areas of transportation, logistics and fueling, including bulk, fleet, event, onsite, emergency services and transloading. The company leverages a team of nearly 500 professionals, a fleet of state-of-the-industry equipment and a national network of premium third-party relationships.