HOUSTON – Following the transition of Susser Holdings Corp. and its Stripes convenience store chain to Sunoco LP, Sam L. Susser, called one of “the most visionary innovators in the c-store industry,” has resigned from the Sunoco LP board of directors, to be succeeded by Matthew S. Ramsey. 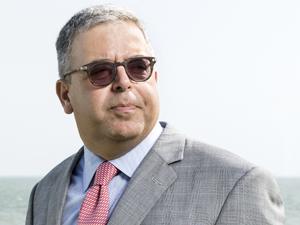 Susser—who has served as non-executive chairman for Sunoco LP since August 2014 when Sunoco LP's parent, Energy Transfer Partners LP (ETP) acquired Susser Holdings Corp.—will “pursue other interests,” the company announced. He could not be reached for comment.

Also departing from Sunoco LP are Rocky Dewbre, who was president and CEO of Susser Petroleum Partners LP, and Mary Sullivan, who was CFO of Susser Holdings and then Sunoco LP, a source who asked not to be identified told CSP Daily News.

The source also said that Sam Susser will no longer have an active role in the company.

"I want to thank Sam for his outstanding work and wise counsel during the merger of Susser with ETP, and through the integration of Susser's businesses with our Sunoco Inc. retail marketing and wholesale fuel distribution business," said Kelcy L. Warren, chairman and CEO of ETP, Houston. "Sam, his family and team have built an exceptional convenience-store and fuel-supply business that is an outstanding addition to the [ETP] portfolio of assets. Over the years, the Susser organization has been one of the most visionary innovators in the c-store industry through its Stripes retail chain.”

He continued, “Under Sam's leadership, Stripes grew from five stores when Sam joined the business in 1988 to a total of 650 stores, with 640 branded dealers, 12,000 employees and $6.8 billion in revenue. Stripes is a premier c-store in every market it serves, and Sunoco and Stripes are now well-positioned to capitalize on the strong growth opportunities that Sam, his family and team have created for our brands in the Southwest and beyond. We applaud him for these accomplishments, and we wish the best for his new business ventures.”

CSP named Sam Susser as its Retail Leader of the Year (RLOY) for 2014.

The partnership also officially announced the resignations of Marshall S. McCrea, Martin Salinas Jr., and William P. Williams from the board due to other commitments. As a result of their departures, James W. Bryant and Richard D. Brannon have been appointed to the board. Bryant and Brannon previously served on the board of Regency Energy Partners LP, which has just merged with ETP. Brannon also previously served on the board of Sunoco LP.

Houston-based Sunoco LP is a master limited partnership (MLP) that primarily distributes motor fuel to convenience stores, independent dealers, commercial customers and distributors. It also operates more than 150 convenience stores and gas stations. It conducts its business through wholly owned subsidiaries, as well as through its 31.58% interest in Sunoco LLC, in partnership with an affiliate of its parent company, ETP. While primarily engaged in natural gas, natural gas liquids, crude oil and refined products transportation, ETP also operates a retail and fuel distribution business through its interest in Sunoco LLC, as well as wholly owned subsidiaries, Sunoco Inc. and Stripes LLC that operate approximately 1,100 convenience stores and gas stations.

Who & What Inspires Sam Susser?

How Susser Earned His Stripes (Slideshow)