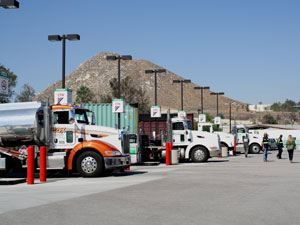 The Auburn, Calif.-based company initiated the growth strategy when it acquired the commercial fueling, wholesale contracts and two of 16 convenience stores from Redding Oil, Redding, Calif., in May 2014 and lubricants, delivered fuels and commercial fuel accounts from Allied Washoe, Reno, Nev., in January 2014.

Flyers Energy also said that it is "hopeful" that it will complete several more acquisitions in the western United States in 2015.

Poma Distributing, Redwood Coast Petroleum and the related entities were all owned by Poma Holding.

As reported in a 21st Century Smoke/CSP Daily News Flash, through this current deal, Flyers Energy has acquired nine unattended commercial cardlock sites around the Inland Empire and in Sonoma County, wholesale distribution contracts for more than 100 branded gas stations and distribution rights for three commercial lubricants brands in their respective geographic areas.

These transactions will effectively triple Flyers' lubricants volume, whose commercial lubricants distributorships had been previously restricted to northern Nevada and areas around Lake Tahoe and Santa Cruz.

"Poma is a good operation and a great fit for us," said Walt Dwelle, managing partner of Flyers Energy. "This deal allows us to expand our wholesale supply and lubes businesses into new geographic areas--particularly southern California, where we are a relatively new participant in the market."

Poma CEO Dave Larimer said, "We believe Flyers is an excellent buyer of the Poma Cos. Their strong heritage and rich family history in California are well aligned with the Poma Cos. as is their passion around providing superior guest service."

Flyers Energy Anxious to Grow in the West