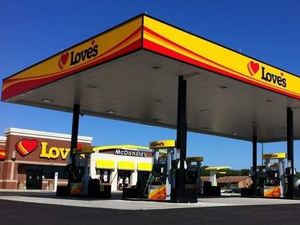 The unscientific, monthly "snapshot" of newly opened or closed U.S. c-stores, gas station, truckstops and travel centers not previously reported in CSP Daily News has been arranged by state. Click through each item for more details on each store.

Kum & Go opens a third 5,000-square-foot convenience store in Paragould, Ark., on April 11. The new store offers freshly made-to-order pizzas, baked goods and breakfast and deli sandwiches ­all prepared daily in Kum & Go's onsite kitchen. Outside, a wide variety of fuel options give customers more value and choices at the pump, including diesel and E-85 fuel.

Gate Petroleum has opened a new c-store in Jacksonville, Fla., near the Town Center and the University of North Florida.

Lex Brodie's Tire, Brake & Service Co. in Honolulu shut down its gasoline dispensers in early April after 50 years to focus on its tire and auto service business.

Maverik Inc. has opened a new c-store in Meridian, Idaho.

Love's Travel Stops & Country Stores Inc. opened a new travel stop in Oglesby, Ill., on I-39, at Exit 54, on April 10, its ninth in the state. It features a Hardee's restaurant, 86 truck parking spaces, seven showers and an on-site Love's Truck Tire Care center.

Len McEnery, a former executive for the former Gas City chain that was owned by his brother William, has opened his third gas station and c-store. Rt. 6 Food N Fuel opened in early April in New Lenox, Ill.

The Swifty gas station in Richmond, Ind., was sold and closed on April 16. The Swifty chain, headquartered in Seymour, Ind., has been selling stations for the past several months.

Kwik Trip took over the Watts Cookin' restaurant and Austin Auto Truck Plaza in mid-April, closed the business for several days and reopened it as a Kwik Trip. The company plans to start construction on a 7,000-square-foot truck stop in June or July. The current truck stop will remain open during construction.

The c-store in front of Leigh Mall in Columbus, Miss., that was closed for approximately three months is back in business with new management under the name E Z Shop. Midstates Petroleum, which bought a handful of gas stations from Sanders Oil Co. last year, is the owner. In addition to selling fuel, drinks and snacks, it also offers cellular phone and computer repair services.

Micoley.com is selling a combination gas station and c-store property in Oakland, Neb.

A Union Springs, N.Y., gas station and c-store is closed. After a volatile week marked by confrontations between fighting factions within the Cayuga Indian Nation of New York, the Cayuga County branch of Lakeside Trading shut down April 29 after briefly opening.

Love's Travel Stops & Country Stores Inc. has opened a new location in Salisbury, N.C., on I-85 at Exit 71. The new location has 85 truck parking spaces, seven showers and a Love's Truck Tire Care center, as well as Chester's and McDonald's foodservice.

Jodi and Timothy McGowan opened a c-store, the Comet, in Alexander, N.D., in mid-April, aimed at giving locals a place to buy milk and basic groceries without battling highway traffic. The small town had a c-store, but it closed after an expanded truckstop opened outside of town.

Focaccia's Market has opened in the Fifth Third Center at One SeaGate concourse, which marks a return of c-store retailing to downtown Toledo, Ohio, after nearly a seven-year absence. The market, which features sundries, Starbucks, sandwiches, salads, soup, desserts and other items from Focaccia's Deli in the nearby HCR ManorCare building.

Frank's Service Center, one of the last locations in Hartsville, S.C., to offer full-service gasolune, closed its doors in early April.

A new Circle K c-store with Shell fuel opened in Harrisonburg, Va., on April 4; it is part of the Circle K Franchise system.