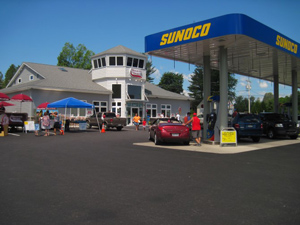 The unscientific, monthly "snapshot" of newly opened or closed U.S. convenience stores, gas station, truckstops and travel centers not previously reported in CSP Daily News has been arranged by state. Click through each item for more details on each store.

Sultan Inc., led by Chodry Shahbaz Cheema, acquired a pair of CITGO gas stations, one in Little Rock, Ark., and one in North Little Rock, from KSA Investment Group Inc., led by Mohammad Lone, for $1.4 million.

On June 14, a new Dash In convenience store with food, fuel and car wash in Waldorf, Md., hosted a grand opening community celebration.

The Wakeland Oil Shell gas station in Owosso, Mich., reopened its Hometown Market Southside in early June after construction that began in Oct. 2013, and held a grand opening event June 17, 18 and 19.

Hy-Vee Gas reopened June 24 in Albert Lea, Minn., in a new building with a Caribou Coffee. The old station had four pumps with eight dispensers, and the new one has eight pumps with 16 dispensers. It also added diesel dispensers. The former station will be torn down to make room for a drive-thru, access to a car wash, a second entrance, additional parking and more. The new store soda, iced tea, slushies, F'real shakes, oatmeal, hot dogs, tornadoes, made-in-the-store pizza, take-and-bake pizza, fresh fruits and Di Lusso sandwiches. It is slated to begin offering propane exchanges.

A Double Quick convenience store and McDonald's opened in Leland, Miss., on June 17.

A Keene, N.H., Gulf gas station known for its discount prices closed in mid-June. Jeff Brown, manager for Rymes Propane & Oil in Concord, which owns the station, said the company has not decided what is going to happen to the property, but the station won't reopen.

Cumberland Farms has sold the site of a Gulf gas station in Brooklyn, N.Y., to Life Storage for $3.1 million in mid-June. The tanks and canopy were removed from the gas station prior to the sale to make way for development. The company acquired Gulf Oil's stations and trademark in the Northeast in 1986.

Stewart's Shops held a ribbon-cutting ceremony and opened a new convenience store in Perth, N.Y., on June 27. It features six gas pumps, diesel fuel, a beer cave, fresh-made pizza, expanded seating and more parking. The company also celebrated the completion of an expansion project at a c-store in Walden, N.Y., on June 6 and the remodeling of a c-store in Ballston Spa, N.Y., on June 27.

Monkey Market in Wilmington, N.C., named for its proximity to Monkey Junction, was set to open in late June. Owner Stephen Ohm, who will operate the convenience store with his wife, Brittni, an eighth-grade special education teacher, said the nearly 3,000-square-foot drive-thru store will offer the same inventory as a traditional c-store except for lottery. It will stock snacks, soft drinks, Starbucks drinks, fruit drinks and coffee in addition to beer.

The Sunoco convenience store and gas station in Washington Township in Montgomery County, Ohio, closed in mid-June and the fuel dispensers were removed. Owner Triumph Energy did not offer a reason.

Kum & Go opened a new convenience store on June 13 in Bixby, Okla. The 5,000-square-foot store replaces a smaller store nearby. And on June 27, the company opened a new, 5,000-square-foot c-store in Sapulpa, Okla., on the site of a razed Kum & Go. A new island with diesel pumps provides easy access for larger vehicles.

Love's Travel Stops & Country Stores Inc. opened a new travel stop in Erick, Okla., on I-40, Exit 7, on June 26, replacing the Love's that opened in Erick in 1989. It offers four diesel bays and a Subway restaurant, roller grill items and four showers, bulk diesel exhaust fluid (DEF) at the pump at all diesel lanes, RFID cardless fueling technology and other amenities.

Neil Amper, vice president of Capstone Properties, sold a 7-Eleven convenience store in Providence, R.I., in mid-June for $475,000. The owner was W.C. P Associates and the buyer was LGM Associates. Amper leased the property to 7-Eleven in 2005 and was the sole broker in sale of the property.

A 7-Eleven opened June 3 in San Antonio, Texas, at the former Kress building. The franchise signed the lease to move into the building in March.

Sheetz Inc. opened a new, 6,000-square-foot convenience store on June 12 in Spotsylvania County, Va. It opened another c-store on June 19 nearby with a drive-thru, which the company is piloting at new locations with large lots.

Coulee Gas, a new fuel and convenience store in Grand Coulee, Wash., was slated to open in early June, said Raj Sandhu, one of the owners under the company name Sangam Investment LLC.