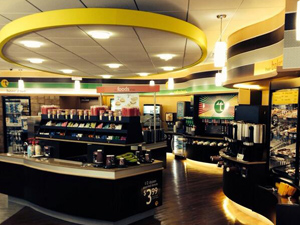 The unscientific, monthly "snapshot" of U.S. c-stores, gas station, truckstops and travel centers not previously reported in CSP Daily News has been arranged by state. Click through each item for more details on each store.

Murphy USA opened a store in Springville, Ala.

Shop24 held a grand opening for its latest automated c-store at the University of Alabama's The Retreat at Lake Tamaha off-campus housing complex in Tuscaloosa, Ala.

The J & P Flash Market Convenience Store & Fuel Center in Salem, Ark., closed in mid-March. The company will focus its attention on a nearby location it bought several years ago.

Imperial Beach, Calif., 7-Eleven owners Dottie and Roger Sandoval have passed the torch to a new owner after 40 years. They will focus their efforts on a store on Picador, Calif.

A 7-Eleven store in San Mateo Heights, Calif., has closed after a legal settlement between the city and 7-Eleven Inc. In 2012, city planners mistakenly approved the store. The City Council reversed that decision after the market had opened. The property owner and 7-Eleven sued to overturn that decision and lost. 7-Eleven issued a statement saying it was disappointed not to prevail in court. It said it tried to appease neighbors by reducing the noise of delivery trucks and performing extra litter patrols. "In good faith and relying on the permits that were issued by the city, we opened this location and operated our retail business as a legally existing, nonconforming use in the area," the statement read. "We want to thank our loyal customers for their support throughout the legal process and during the time that we were in business at North San Mateo Drive. We know that they will miss our products and services, as we will miss serving them."

An old Chevron gas station in Greenacres, Fla., has been replaced with a Cumberland Farms station and c-store.

7-Eleven Hawaii held a grand opening for its Kingsgate location.

The Illinois Tollway Authority closed the Des Plaines Oasis and is removing the over-the-road structure as part of the $2.5 billion Jane Addams Memorial Tollway (I-90) Rebuilding & Widening Project. The two adjoining fuel stations and c-stores operated by 7-Eleven will remain open to provide services for both eastbound and westbound travelers.

A BP gas station in Edwardsville, Ill., has closed. Although it could not sell fuel, it liquidated its c-store merchandise under a court order that granted the owner permission to sell off the inventory without interference from Buck's Inc., which owns the property and has supplied gasoline for six years.

MAPCO Mart opened its newest store in Southaven, Miss. It offers S. It features Chester's Chicken and My Deli.

Mirabito Energy Products opened a new location in Oneonta, N.Y. The new Mirabito Convenience Plaza is more than double the size of their former store that stood in the same place.
Stewart Shops reopened a remodeled c-store in Schenectady, N.Y.

Love's Travel Stops & Country Stores opened a new travel stop in Andrews, Texas, on U.S. Highway 385. The model for the new store is the first of its kind for the company. Its design allows the company to expand beyond interstates to major highways across the nation. "Andrews is an ideal place to introduce the new concept," said Greg Love, co-CEO of Love's. "Our loyal customers operate all over the country and they've indicated gaps in driver services and amenities exist beyond the interstate system.

Little General Stores opened a razed and rebuilt c-store in MacArthur, W.Va. In I-77, Exit 42. This location offers BP fuel, an Arby's Restaurant with drive-thru and a Subway Restaurant.