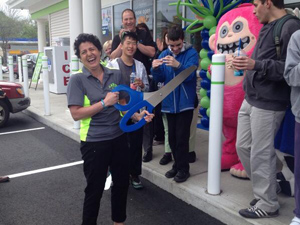 The unscientific, monthly "snapshot" of newly opened or closed U.S. convenience stores, gas station, truckstops and travel centers not previously reported in CSP Daily News has been arranged by state. Click through each item for more details on each store.

Hagen Realty Group is offering a former retail petroleum outlet with c-store situated on 2.98 acres in Montgomery, Ala. The 1,890-square-foot c-store was constructed in 1981 and renovated in 2000.

May 2 marked the opening of a new Street Corner c-store franchise at The Great Mall of the Bay in Milipitas, Calif. The chain opens stores in small and underused spaces in shopping malls, universities and other environments. The new, 624-square-foot location is the chain's 46th.

Sierra Energy opened a new c-store on May 15, with the grand opening of Sierra Super Stop in Wallace, Calif.

The Moultrie-Colquitt County (Ga.) Chamber of Commerce held a ribbon-cutting ceremony for Plymel Foods, a gas station that includes a Chester's Chicken, pizza, yogurt, donuts and convenience food and beverages.

Gimbel & Sons Country Store in Boothbay Harbor, Maine, has been in operation since 1971. As of May 17, it will also become a convenience store, adding cigarettes, snacks, soda, juice, energy drinks, teas and Oakhurst orange juice, milk, eggs and yogurt. It will also be adding an ATM.

Columbia Village LLC of Vienna, Va., purchased a 3,153-square-foot c-store in Columbia, Md., for $1.2 million, Spence Hill Associatesannounced on May 15. The property is net leased to 7-Eleven Inc.

Royal Farms held a ribbon-cutting ceremony on May 23 to celebrate the grand opening of a c-store in Queen Anne, Md. The store is built to Leadership in Energy & Environmental Design (LEED) standards. (See Royal Farms' Top 101 listing.)

A private buyer purchased two Hanscom's truckstops (northbound and southbound) in Portsmouth, N.H., at an auction on May 21.

Noco Energy has purchased a Mobile Mart in Buffalo, N.Y.'s Elmwood Village, for $1.6 million. It became a NOCO Express on May 23 and has renovated the c-store, which will continue to carry Mobil fuel.

Stewart's Shops opened a replacement c-store in Guilderland, N.Y., on May 29. Demolition of the old shop will begin soon and a new gas island will be constructed and will be up and running in late June or early July. (See Stewart's Shops' Top 101 listing.)

Love's Travel Stops & Country Stores held a ribbon-cutting ceremony on May 15 for its return to Choctaw, Okla.

Wawa opened a new c-store in Phoenixville, Pa., on May 16.

Buc-ee's opened a new 60,000-square-foot mega-convenience store in Texas City, Texas, on May 7. It has 57 fueling positions.

On May 14, CEFCO Convenience Stores opened a new store in Salado, Texas. It is the 16th 5,000-square-foot prototype location, the fourth prototype opened in 2014. (See CEFCO's Top 101 listing.)