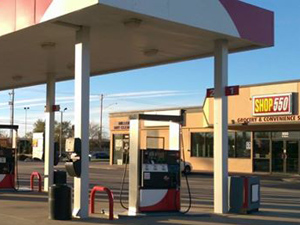 Real-estate advisors Hanley Investment Group announced on November 17 that it negotiated the sale of a triple-net (NNN) ground lease occupied by a single-tenant 7-Eleven in Oceanside, Calif., for $2.1 million, which represented a 4.29% capitalization rate. The 2,400-square-foot 7-Eleven convenience store building and gas station is situated on a 25,700-square-foot lot, the site of a former Union 76 station. Hanley represented the seller, a private investor from Agoura Hills, Calif. Jay Patel of Cushman Wakefield represented the buyer, a private investor from northern California.

On November 14, Thorntons Inc. announced the official opening of its newest Tampa, Fla., convenience store, the eighth in the Tampa market.

Shop550, a new gas station and convenience store, opened on November 7 in Wichita, Kansas, at the site of the former Miriam's Quick Mart. Owner AJ Aluthwala's Bredix Inc. supplies about 80 area mom-and-pop c-stores with items such as lighters, ashtrays, animal figures, bracelets and anklets. This is the company's first foray into owning a c-store. "We have plans to open up two more convenience stores within the next couple of years," Aluthwala said.

Wawa Inc. held the grand opening for a new convenience store in Halethorpe, Md., on November 14.

After 40 years, Wawa replaced its store at Princeton University with a new store next to the new Princeton, N.J., train station. It opened on November 21 and features the chain's newest design prototype, which includes a "kitchen-forward" design and a full-service beverage area. The store will have architectural features unique to the location, including those designed to coordinate with the transit center.

Stewart's Shops held the grand opening of a new convenience store in Cobleskill, N.Y., on November 7.