UPDATE: According to data provided by GasBuddy, the current Speedway count is 2,156, while the current Hess count is 645 (see map below for the conversion progress). 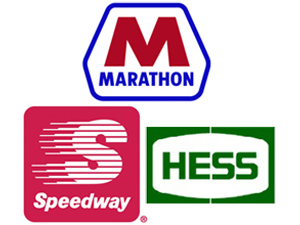 FINDLAY, Ohio --Marathon Petroleum Corp. (MPC) has now converted more than half of the 1,250 Hess gas stations and convenience stores it acquired in October 2014 to its Speedway brand, Gary Heminger, president and CEO, said in reporting MPC’s second-quarter 2015 financial results.

It has converted more than 650 of the retail sites to the Speedway brand since the acquisition, said Heminger on the company’s earnings call.

According to data provided by GasBuddy, the current Speedway count is 2,156, while the current Hess count is 645 (see map below for the conversion progress).

"We are on pace to achieve the expected synergies for 2015 from light-product supply, as well as from operating and administrative expense savings. Further, the accelerated progress for store conversions and subsequent remodels has allowed us to more rapidly implement Speedway's industry-leading Speedy Rewards loyalty program. This program and other marketing enhancements are expected to drive the anticipated synergies to the business over the next several years."

Tony Kenney, president of Speedway, said. “We're moving along at an accelerated pace in converting the [Hess] brand to Speedway. … The important thing there is it's more than just the brand. What's going inside the store is all of our technology that is the platform for our marketing programs, primarily our loyalty program, all of our inventory management, other things that drive savings and synergies for us as we operate convenience stores. … As we begin to bring on all of the marketing enhancements through the conversions inside the store, then we'll start to realize those benefits down the road.”

Speedway's income from operations was $33 million higher in the quarter as compared to second-quarter 2014. Speedway's newly acquired locations contributed income of approximately $14 million to the quarter's results or approximately $45 million of EBITDA.

Speedway same-store gasoline sales volume was down two-tenths of a percent versus same quarter last year compared to estimates of U.S. demand growth in the second quarter of approximately 3% higher. Overall, gasoline sales volumes for legacy Speedway locations were up 3% in the quarter, reflecting the impact of investments in new, rebuild and remodel locations.