NEW YORK -- Wal-Mart Stores Inc. again took the No. 1 spot in Fortune magazine's Fortune 500 ranking this year, but as usual, major oil and energy companies were not far behind, and convenience store companies--several recently spun off or acquired--took prominent spots throughout the list. 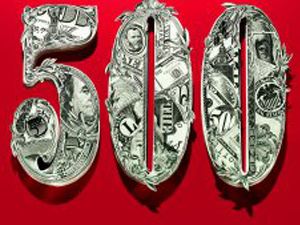 Marathon Petroleum Corp. (which recently acquired the gas station and c-store network of No. 84 Hess Corp.) at No. 25, ConocoPhillips at No. 47, Energy Transfer Equity (its Energy Transfer Partners has acquired the Sunoco gas station and c-store and recently c-store and gas station retailer No. 439 Susser Holdings) at No. 54, CHS (Cenex) at No. 62, World Fuel Services at No. 71, Tesoro at No. 75, Marathon Oil at No. 188, Western Refining (with the Giant, Mustang, Sundial and Howdy's c-stores and the recently acquired Northern Tier Energy's SuperAmerica gas stations and c-stores) and Murphy Oil at No 470 (with the recently spun off Murphy USA at No. 175).