BOCA RATON, Fla. -- Jeff Turpin, a more than 20-year veteran of the convenience-store industry, will chart a new course as CEO of Admiral Petroleum Co., which Sun Capital Partners Inc. has acquired along with Lemmen Oil Co. 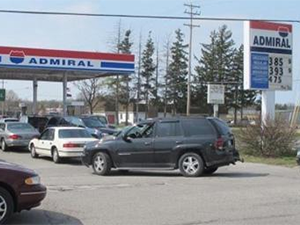 The companies did not announce the financial terms for the purchase of the two related Midwestern convenience-store businesses.

Turpin, who helped guide Sun Capital through its operation and eventual sell-off of the Village Pantry c-store chain, said his goal is to grow Admiral Petroleum and Lemmen Oil.

“We want to build on the value that the Lemmen family provided to customers in Indiana and Michigan,” Turpin told CSP Daily News. “That’s what Sun Capital does; it builds value in the businesses it owns.”

Turpin noted that Admiral Petroleum/Lemmen Oil is a more than 100-year-old company, having been established in 1905. While most of the family members exited the company with the closing of the Sun Capital deal, Brett Lemmen, part of the fifth generation of the Lemmen family to drive the business, will remain with the company as vice president.

“Admiral has been an innovator in the convenience-store sector, and we look forward to building on the business’ strong reputation as it explores new growth opportunities,” said Marc Leder, co-CEO of Sun Capital. “We’re excited to once again partner with Jeff Turpin, whose proven track record in this industry is second to none. I’m confident his deep experience and operational know-how will be invaluable as Admiral charts an exciting course forward.”

Admiral Petroleum incorporated in 1956. Its first stores were in Greenville, Mich., retailing gasoline and a few sundries at a couple locations that still operate today. Admiral was one of the first pioneers of the milk, bread and egg concept in gas stations, it said. In 1995, Admiral started another division with Admiral Discount Tobacco. This concept is a wholesale and retail marketing of tobacco products in a strip-mall setting.

Admiral today employs approximately 1,400 people and operates 165 stores covering the lower peninsula of Michigan, with stores in the Upper Peninsula and Indiana.

“At Sun Capital, we understand the unique dynamics facing convenience-store owners and operators today,” said Sun Capital principal Jared Wien. “Over the course of more than a century, the Lemmen family successfully built an enduring business. We look forward to collaborating with Jeff and the Admiral management team to help the company reach its full potential through operational enhancements, organic growth and strategic acquisitions.”

Sun Capital accidentally got into the c-store industry in September 2006 through the acquisition of Marsh Supermarkets in Indiana. It soon recognized the fragmented nature of the convenience sector and embarked on a buying spree. From 2006 to 2013, Sun completed a series of c-store transactions that included Next Door Stores from Imperial Co., Scotchman and Young’s from Worsley Cos. and Li’l Cricket. Prior to the acquisition of Marsh, VPS operated as a division of Marsh. In April 2009, Sun Capital combined the Southeast and Midwest stores to form the VPS Convenience Store Group as a stand-alone entity to implement operational improvement initiatives.

In first-quarter 2015, Sun Capital entered into an agreement with Richmond, Va.-based GPM Investments LLC for GPM to purchase the Midwestern division of VPS Convenience Store Group LLC, which consisted of 163 company-operated convenience stores in Indiana, Ohio, Michigan and Illinois operating under the Village Pantry and Next Door Store brands. This transaction added to GPM’s acquisition of the Southeast operations of VPS in August 2013, which included 263 convenience stores under a variety of names. Those stores became a division of the company called GPM Southeast, located in North Carolina, South Carolina, Tennessee and Virginia.

Following GPM’s acquisition of VPS, then chairman and CEO Jeff Turpin told CSP Daily News that he would be “absorbing life’s changes … looking for his next adventure.” But he said that the c-store industry hadn’t seen the last of him.

“I’m ready for more travel, biking adventures and family time,” he said last March. “But I’ve had too much fun in this industry. I’m not ready to say goodbye. … I plan to stay in the business. I’m not quite ready for the transition of overseeing 430 stores and working with many dedicated employees across eight states to fıshing off a pier at Wrightsville Beach.”

Boca Raton, Fla.-based Sun Capital Partners is a global private-equity firm with expertise in the consumer products and services, food and beverage, industrial, packaging, chemical, building products, automotive, restaurant and retail sectors. It has invested in more than 320 companies worldwide across a broad range of industries and transaction structures.