PHILADELPHIA -- Sunoco's purchase, through an affiliate, of the 300-store Mid-Atlantic Convenience Stores (MACS), demonstrates that consolidation and surprising strategies are still in play within the convenience-retail channel. 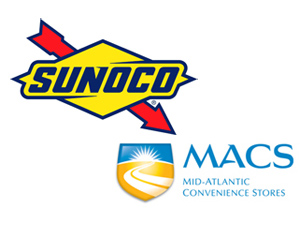 The Sunoco affiliate on Thursday announced that it has completed the acquisition of Richmond, Va.-based MACS for an undisclosed amount, leaving in question the future of the Circle K brand and the licensing agreement struck between MACS and the Laval, Quebec-based Alimentation Couche-Tard Inc. a little over a year ago.

"We are very excited about the addition of MACS to the Sunoco retail network," said Robert Owens, president and CEO of Sunoco Inc., who did not elaborate on the "affiliate" tied to Sunoco that actually made the purchase. "MACS has developed a strong and successful retail organization that fits well into Sunoco's existing operations and footprint."

He added, "We have tremendous respect for what MACS has accomplished, and we will work collaboratively to preserve the best of both the MACS and Sunoco worlds."

Elaborating on the statement, Jeff Shields, a Sunoco spokesperson, told CSP Daily News only that the leadership at both Sunoco and MACS will work towards the integration of the MACS acquisition into the Sunoco network of about 5,000 sites, with everything from corporate to store operations to move forward with "business as usual."

Shields would not comment on the motives behind the purchase or plans for the Circle K name going forward. The brand came into play late last year when MACS bought into the Circle K brand as part of a move to unify its stores and grow an underdeveloped area for the national c-store name already more than 6,000 stores strong in North America.

The purchase brings to fore ongoing developments within the channel as a whole, namely the growing role of master limited partnerships (MLPs) and private-equity firms in the reshaping and consolidation of the c-store channel.

MACS was initially formed by the Greenwich, Conn.-based Catterton Partners, a private-equity firm that accrued the network via strategic purchases of a regional chain and then a large 231-store portfolio from Houston-based ExxonMobil. Through 2010-2011, its leadership solidified and by 2012, an agreement developed for MACS to become a "brand developer" for Circle K, which allowed it a bit more flexibility to work within the brand's programs while MACS itself remained a separate entity.

According to a statement by Catterton officials, the rebranding of the MACS stores, the enhancement of store presentations, implementation of merchandise resets and focus on refreshments and foodservice have resulted in same-store sales growth of more than 46% over the last two years (excluding fuel).

Scott Dahnke, co-managing partner at Catterton, said, "Our investment in MACS represents another successful strategic partnership for Catterton. MACS is now a leading convenience store operator in the Mid-Atlantic region, with an attractive portfolio of stores and strong retail offering. We are pleased to have participated in MACS' success during our three years of ownership and believe it remains well-positioned for continued growth and success within the Sunoco organization."

On the Sunoco side, Dallas-based Energy Transfer Partners LP (ETP) bought the assets of Philadelphia-based Sunoco in 2012, including its pipeline and retail operations. Sunoco's APlus brand has developed a strong merchandising and coffee program, as well as launched a rewards program in the late 2000s.

While other MLPs have opted to spin off retail assets (see the June 2013 cover story of CSP magazine), ETP has opted to hold onto its pipeline, storage and processing assets along with its retail sites thus far.

ETP officials deferred comment on the MACS transaction to Sunoco.

Industry expert Ken Shriber, managing director of Petroleum Equity Group Ltd., called the deal "equally surprising on both ends. And this puts to bed the question, at least for now, if [Sunoco] is going to stay in the fuels marketing business within the Energy Transfer Partners platform," he told CSP Daily News. "[The acquisition] makes sense for them because it's within Sunoco's large regional footprint, and it offers significant fuels growth and efficiencies from their existing infrastructure."