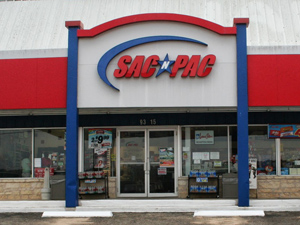 Stripes LLC, the c-store subsidiary of Susser Holdings, plans to acquire and initially operate the properties under the Sac-N-Pac brand until it is determined which stores will be branded Stripes and which stores may be converted to the wholesale platform. Initially, 10-15 stores have been identified as stores that could accommodate Laredo Taco Co. restaurants without substantial alterations to the existing buildings. Susser Petroleum Partners will acquire the third-party fuel supply contracts and will supply motor fuel to the convenience stores. Additionally, Stripes LLC is acquiring seven parcels of land for future development of Stripes/Laredo Taco Company units.

The transaction is subject to customary conditions to closing, including satisfactory completion of due diligence, and is expected to close in the first quarter of 2014 and to be accretive to both SUSS and SUSP. Terms of the transaction were not disclosed.

"This is another instance where the combination of our wholesale and retail platforms work together to create great value in making a strategic acquisition like Sac-N-Pac and Warren Fuels," said Sam L. Susser, chairman and CEO of Susser Holdings. "We are pleased to expand our retail and wholesale operations in this rapidly growing area of Texas. We have tremendous respect for the fine retail and fuel distribution businesses that the Warren family has built, and we welcome the many dedicated employees at Sac-N-Pac to the Susser organization."

Blair Warren and Cheryl Warren Cuppetilli of the Warren family said, "This decision was a difficult one given our close ties with our communities and the relationships we have built with our employees and business associates. Sac-N-Pac and the Warren family are pleased to have entered into this agreement with a company that we believe will be a good partner with the communities we have served for the last 50 years. We also want to thank our employees for their many years of loyal and dedicated service to the Sac-N-Pac mission."

Susser Holdings is a third-generation, family-led business based in Corpus Christi, Texas, that operates approximately 575 convenience stores in Texas, New Mexico and Oklahoma under the Stripes banner. Restaurant service is available in over 370 of its stores, primarily under the proprietary Laredo Taco Co. brand. Susser Holdings also is majority owner and owns the general partner of Susser Petroleum Partners, which distributes over 1.5 billion gallons of motor fuel annually to Stripes stores, independently operated consignment locations, convenience stores and retail fuel outlets operated by independent operators and other commercial customers in Texas, New Mexico, Oklahoma and Louisiana.