EL PASO, Texas -- In a deal mainly intended to expand its refinery presence, but which includes the SuperAmerica downstream network, Western Refining Inc. said that it has entered into a definitive agreement to acquire ACON Investments' (ACON) and TPG's ownership interests in Northern Tier Energy LP for a total consideration of $775 million. 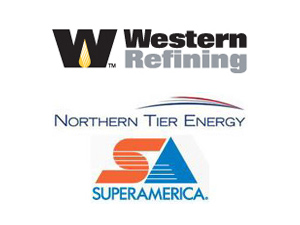 Ridgefield, Conn.-based Northern Tier Energy's assets are located in the Upper Midwest region. Along with the St. Paul Park Refinery in St. Paul Park, Minn., acquired from Marathon Oil Corp. in Dec. 2010 by ACON and TPG, as well as other midstream assets, the deal encompasses retail assets that include the SuperAmerica retail channel--163 company operated convenience stores and 74 franchised convenience stores located primarily in Minnesota and Wisconsin. It also owns a bakery and commissary under the SuperMom's brand.

"This investment further enhances our strategic goal of expanding our refining presence in areas with direct pipeline access to cost-advantaged crude oil resources. By adding these strategically aligned assets to our business portfolio, this transaction adds scale to our business and diversifies our operations by adding a new geographic region to our refining platform," said Jeff Stevens, CEO and president of Western. "Northern Tier Energy's St. Paul Park refinery is a very successful refinery with pipeline access to cost-advantaged crude oil and refined product regions that historically have generated strong product margins. The combined strength and scale of the two organizations will provide future growth opportunities for both companies over the long-term."

Hank Kuchta, CEO and president of Northern Tier Energy, said, "We are excited to welcome Western as a new strategic partner and investor that is committed, as much as we are, to Northern Tier Energy's long-term success. We thank ACON and TPG for their support over the past three years, and we now look forward to working together with the Western Refining team to maximize value for all of our stakeholders."

During Northern Tier Energy's third-quarter 2013 earnings call, Kuchta declined to take questions on the Western Refining deal. "I think you have to leave it to your imagination a little bit what the benefits can be from the two companies put together. They have some refineries in a C-Corp. We're a variable MLP. Who knows? Maybe there's some benefit there. I think … long-term, that there are benefits for both companies and growth for both companies. … We'll see what happens. [Northern Tier Energy] will remain as it's been run. There haven't been any changes to the senior management and Western has asked us to run it as we have been."

As reported in a Raymond James/CSP Daily News Flash on Tuesday, as a result of this transaction, Western Refining now owns 100% of the general partner and 35,622,500 common units, or 38.7%, of Northern Tier Energy. The balance of the limited partner units will remain publicly traded. The companies signed and closed the transaction on Nov. 12, 2013.

As a result of the acquisition, Western Refining's platform will include refining capacity of 242,500 barrels per day; pipeline access to cost-advantaged crude oil sources in the Bakken, Permian, San Juan, and western Canada regions; wholesale distribution of approximately 160,000 barrels per day to customers in the Southwest, Mid-Atlantic and Upper Midwest; integrated network of 458 retail convenience stores; and extensive crude oil and refined product logistics assets.

ACON Investments is a Washington, D.C.-based private-equity firm and longtime energy investor, with experience in upstream and midstream oil and gas as well as investments in power infrastructure and energy services. San Francisco-based TPG is a leading global private investment firm founded in 1992 with $55.3 billion of assets under management with energy investments by sector include oil and gas, midstream and oil field services, downstream, coal and power, chemicals and cleantech.

Western Refining also owns the general partner and approximately 65% of the limited partner interest of Western Refining Logistics Partners LP, which owns and operates logistics assets related to the terminalling, transportation, and storage of crude oil and refined products.