SCOTTSDALE, Ariz. -- Higher buying multiples and an emerging buying wave became evident at an educational session at CSP's 2013 Outlook Leadership Conference this week. What started out as a workshop on structuring the financing of a convenience store acquisition lead to talk of increasingly high multiples, even in the face of a store's falling fuel volumes. 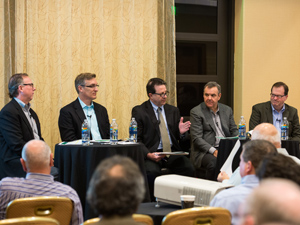 Cheap capital, a growing number of lenders and the proliferation of master limited partnerships (MLPs) or the splitting of retail assets from semi-major oil companies have led to deals in California specifically as high as 11x with other purchases in the western states at 8x to 9x, and even in Tennessee where recent multiples have been in the 7x to 8x range.

"What it tells you is demand exceeds supply for quality assets," Ruben told the audience of about 70 conference attendees.

Determining factors appear to be quality and nature of the real estate, store size, urban or rural location, predictability of cash flow and strategic fit, which in some cases allows even the old, kiosk-style property to sell for a higher multiple. Ruben said that while he's been seeing this trend grow, "at a certain point you have to ask, 'Does this make sense in the long run?'"

The panel of five representing both lenders and retailers reviewed a hypothetical purchase of a chain in Vegas, reviewing the structure of its initial purchase and then watching the value of the asset dwindle over three years.

Set up as a 50-store operation, the hypothetical deal broke down into high- and low-performing stores and a third grouping of average "core" stores, with financial criteria and numbers specific to those groupings. Based largely on the sale and lease-back of the land the stores sat on, the deal for the most part fell within panelists' parameters.

Some raised issues to watch out for. Don Bassell, CFO for Mid-Atlantic Convenience Stores, Richmond, Va., which in recent weeks itself was purchased by Philadelphia-based Sunoco, said, "You have to ask how steady is that fuel margin and what's the predictability of that cashflow. Reliance on fuel is an issue."

For lenders on the panel, the structure of the deal was sound because of the collateral. "We've got the dirt," said Kevin Shea, vice president of Getty Realty Corp., Jericho, N.Y. "That's our security."

In the fictional example, the company's cashflow took a hit. Three years down the line, it showed a drop of per-store earnings of their average or "core" stores from $4,402 to a paltry $693.

From his perspective, Michael Phelps, senior vice president of RBS Citizens, Providence, R.I., said his worry with the stores is with management, especially in light of an acceptable amount of fuel volatility; however, he noted that any sign of trouble would typically be caught sooner than later because normal reporting between borrower and lender would have triggered the need for immediate discussion.

"We as an industry invite a bubble," Phelps said. "There's a lot of liquidity and cashflow. I see now [proposals] with structures I've not seen since the early 1990s. Everyone wants to buy at a 2x to 3x multiple and sell for 6x to 7x. We're seeing a lot of that."