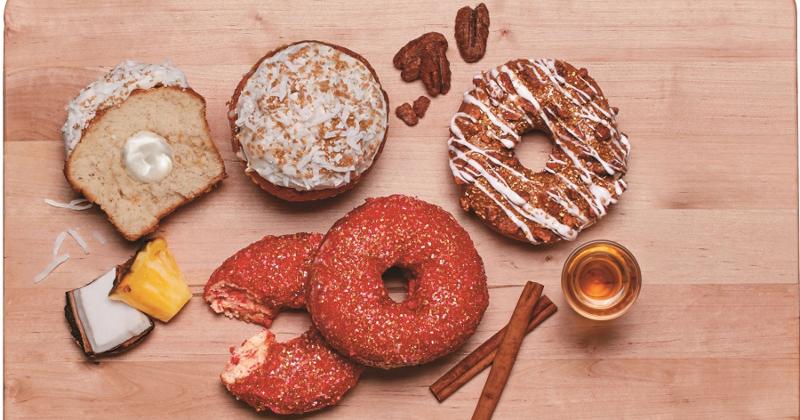 The Pina Colada Cupcake, Bourbon Maple Praline Yeast Donut and Cinnamon Fire Bomb Cake Donut will be baked in local kitchens and delivered to 7-Eleven’s convenience stores every day before the morning rush, the company said.

The treats, located on the top of the fresh bakery case, have a suggested retail price of $1.99. During the chain's fall coffee promotion, the baked goods can be paired with any size cup of coffee or other hot beverage for $1.

“7-Eleven stores are in a unique position to offer innovative premium doughnuts at a great value, relative to the gourmet doughnut industry,” said Vareesha Shariff, 7‑Eleven product director. “The new top-shelf doughnuts and Pina Colada Cupcake have distinctive flavors that play off mixology trends and the craft-cocktail creativity that shows up in upscale bars and restaurants as well as on Instagram.”

The items are inspired by cocktail flavors and are alcohol-free. The white cupcake is made with banana and pineapple and filled with a pina colada-flavored filling and pina colada icing topped with coconut and gold sugar. It is the first cupcake available nationwide in 7-Eleven’s bakery assortment, according to the company.

The Bourbon Maple Praline Yeast Donut is covered with maple and bourbon-flavored icing and topped with praline pecans, white icing and gold sugar. The Cinnamon Fire Bomb Cake Donut has a cinnamon glaze and is topped with red and gold sugar crystals.

Irving, Texas-based 7-Eleven operates and franchises more than 69,000 stores in 17 countries. It is known for its brands such as Slurpee, Big Bite and Big Gulp and has expanded its offerings to include sandwiches, salads, side dishes, cut fruit and protein boxes. The chain is No. 1 on CSP’s 2019 Top 202 ranking of c-store chains by number of company-owned retail units.

Inside the Foodservice Offerings at 7-Eleven’s New Concept Store