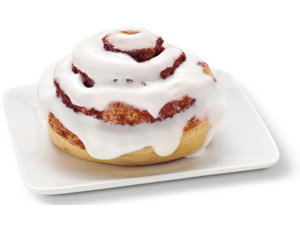 To encourage customers to sample, the retailer will make a limited-time coupon for a free cinnamon roll available on its app beginning Sept. 10. Other limited-time offers featuring the pastry will continue in the coming weeks, and 7-Eleven is encouraging customers to check their smartphones for additional mobile coupons. Mobile coupons--for a free cinnamon roll, 75-cent discount or a free roll with the purchase of a medium coffee--will be available on 7-Eleven's smartphone app now through the end of October.

All 7-Eleven app coupons are good at participating stores, while supplies last.

7-Eleven's fresh food innovations team worked for more than a year on the development with Pillsbury to ensure consistent product quality. Prepared and baked fresh daily in local bakeries across the country, the cinnamon rolls are delivered overnight to stores before the morning coffee crowd arrives.

"Our goal in partnering with Pillsbury was to create an indulgent cinnamon roll that looked and tasted homemade," said Kelly Buckley, 7-Eleven's vice president of fresh food innovation. "For more than 100 years, Pillsbury has been the name in home-baking. Now, 7-Eleven can offer the homemade taste in a convenient, grab-and-go setting."

During the morning rush, participating 7-Eleven stores can serve the cinnamon rolls warm in mini bakery boxes. Created just for the Pillsbury cinnamon roll, the microwave-safe boxes also are available at the bakery case for customers who choose to select an unheated roll to eat later. Rolls take just 10 seconds to heat in a microwave oven in the bakery boxes.

"We expect the Pillsbury cinnamon roll will be a hot seller in the mornings when people are stopping by to grab a cup of coffee on their way to work or school," Buckley said. "However, experience tells us that lots of our customers come into our stores in the afternoons and even late at night looking for a sweet and satisfying treat."

"Partnering with 7-Eleven gives General Mills an opportunity to bring the fresh-baked goodness of a ready-to-eat Pillsbury-branded cinnamon roll to millions of people," said Randy Johnson, General Mills Inc. market manager. "I believe the aroma in the stores and rich taste of these warm cinnamon rolls will make them a hit with 7-Eleven's customers."

"Pumpkin Spice Latte is a sign that autumn has unofficially arrived," said Nancy Smith, 7-Eleven vice president of fresh foods merchandising. "Warm cinnamon rolls and hot pumpkin spice lattes and brewed coffees are seasonal comfort tastes at their best, whether heading out to work in the morning, a ballgame in the evening or as an afternoon treat."