COLLEGEDALE, Tenn. -- Twinkies are already back on shelves and now the new owners of Drake's cakes said Coffee Cakes, Devil Dogs, Ring Dings and Yodels will return next month. 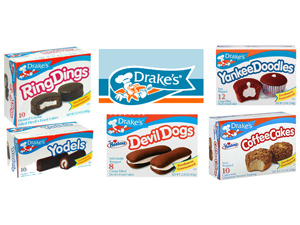 A spokesperson for McKee Foods Corp. told the Associated Press that the company plans to bring back the snack cakes in the third week of September.

The company is still deciding whether to bring back Funny Bones.

McKee Foods, which makes Little Debbie snack cakes, snapped up Drake's cakes from rival Hostess Brands after the company went out of business last year. Twinkies, CupCakes and other snacks were purchased by a pair of investment firms, Apollo Global Management and Metropoulos & Co., which owns Pabst beer.

Collegedale, Tenn.-based McKee Foods also makes a number of snack cakes that competed with Hostess. For example, its Devil Cremes look a lot like Devil Dogs and its Swiss Rolls resemble Yodels. But McKee Foods spokesperson Mike Gloekler told AP that the company doesn't have any plans to phase out any products yet.

Gloekler said distribution for Drake's cakes will be in the same Northeast markets where they were previously sold. McKee is using its own baking plants to make Drake's, but said it will make no changes to the cakes.

McKee Foods has marketing planned for New York City and other metropolitan areas, but Gloekler said it won't be on the same level as for Twinkies. The new owners of Twinkies had put up a billboard in New York's Times Square to trumpet the return of its Hostess treats, and a truck traveled around handing out free samples of the spongy yellow cakes.

''Our Drake's rollout will not be as splashy as the Hostess return,'' Gloekler told the news agency.