HERSHEY, Pa. --  The Hershey Co. said that it has reached an agreement to purchase Brookside Foods Ltd., a privately held confectionery company based in Abbotsford, British Columbia. 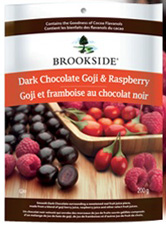 Brookside is a chocolate confectionery company with products based on a formula for making chocolate-covered fruit juice pieces. Brookside holds patents that enable it to make the centers of these distinctive products from real fruit juice. The company also makes traditional chocolate-covered nuts and dried fruit. The products are made at two facilities in British Columbia and Quebec.

The Brookside product line is primarily sold in the United States and Canada in a take home resealable pack type.

"The acquisition of Brookside is an opportunity for Hershey to expand our portfolio in this category," said John P. Bilbrey, Hershey president and CEO. "Brookside pairs dark chocolate with exotic fruit-juice centers, such as goji, acai, blueberry and pomegranate, to create great-tasting treats, while delivering the benefits of flavanols and antioxidants. We look forward to building Brookside by leveraging Hershey's scale at retail."

Ken Shaver, president and CEO of Brookside Foods, said, "We're pleased that a company of Hershey's stature and excellence appreciates Brookside's growth, brand equity and people, as well as the great taste and potential of the Brookside product line."

Hershey expects the acquisition to be slightly accretive in the year subsequent to closing. The acquisition is subject to regulatory approval, customary closing adjustments and Brookside shareholder approval.

Hershey is the largest producer of quality chocolate in North America and a global leader in chocolate and sugar confectionery. Based in Hershey, Pa., The company has operations throughout the world and more than 13,000 employees. With revenues of about $6 billion, Hershey offers a wide range of confectionery products, including such brands as Hershey's, Reese's, Kisses, Hershey's Bliss, Special Dark, Hershey's Syrup, Kit Kat, Twizzlers, Ice Breakers, PayDay and Jolly Rancher. Hershey also is a leader in the premium and artisan chocolate segments, with such brands as Scharffen Berger and Dagoba, offered through the Artisan Confections Co., a wholly owned subsidiary. The company said that it is focused on growing its presence in key international markets in Asia and Latin America while continuing to build its position in the United States and Canada.