BATTLE CREEK, Mich. -- Kellogg Co. has stepped in and scooped up Procter & Gamble's Pringles business after P&G terminated a previously announced deal with Diamond Foods following the revelation of accounting irregularities at Diamond that forced it to place its CEO and CFO on administrative leave (see Related Content below for previous CSP Daily News coverage). Kellogg has entered into an agreement to acquire Pringles for $2.695 billion in cash. 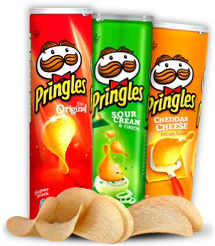 Pringles is the world's second largest player in savory snacks, with $1.5 billion in sales across more than 140 countries and manufacturing operations in the United States, Europe and Asia. The stacked potato crisp has been a mainstay in supermarket snack aisles for more than four decades and is immediately identified by snack lovers worldwide by its unique saddle shape and distinct canister packaging.

In the United States, the acquisition provides a new source of growth for the company's already strong presence in the snacks category.

The deal significantly advances Kellogg's goal of building a global snacks business on par with its global cereal business and adds a complementary product to Kellogg's snacks brands, most notably Keebler, Cheez-It and Special K Cracker Chips, the company said.

The Pringles business enhances Kellogg's existing production capabilities with the addition of two manufacturing facilities, one in Tennessee and one in Belgium.

As reported yesterday in a Morgan Keegan/CSP Daily News Flash, the companies expect to complete the transaction in the summer of 2012, pending necessary regulatory approvals.

"We are excited to announce this strategic acquisition," said John Bryant, Kellogg's president and CEO. "Pringles has an extensive global footprint that catapults Kellogg to the No. 2 position in the worldwide savory snacks category, helping us achieve our objective of becoming a truly global cereal and snacks company. We are delighted to welcome the [1,700] employees of the Pringles organization to Kellogg. Their collective passion and commitment has resulted in Pringles' well-deserved acclaim as one of the most recognized brands in the world."

He added, "Pringles is an exciting brand in a large and growing category. The addition of Pringles to our global cereal and snacks portfolio will provide an excellent return for stakeholders and better position us for future, profitable growth."

P&G's chairman, president and CEO, Bob McDonald, said, "This is an excellent development for P&G, Pringles and Kellogg, creating value for our shareholders and representing an outstanding opportunity for Pringles employees with a leading company in the food sector. Kellogg shares similar values and principles to us, and we are confident that the Pringles business will thrive under Kellogg's leadership."

As a result of the transaction, Kellogg anticipates increasing its outstanding debt by approximately $2 billion, and it expects to limit its share repurchase program to proceeds received by the company from employee option exercises for approximately two years to allow the company to reduce the increased levels of debt.

Kellogg's financial performance in 2012 will depend on several factors, including the exact date of closing; however, assuming the transaction closes on or around June 30, 2012, Kellogg expects that the transaction will:

P&G expects an after-tax gain on the transaction in the range of $1.4 billion to $1.5 billion, or approximately 47 to 50 cents per share, approximately the same as was estimated at the time of the initiation of the original transaction with Diamond Foods in April 2011.

P&G said that, beginning with the January-to-March 2012 quarter, results of the snacks business will be classified and reported as discontinued operations. As such, current and historical results will be excluded from core EPS and organic sales trends.

"The Procter & Gamble Co. and Diamond have mutually agreed to terminate Diamond's proposed acquisition of the Pringles business and have released each other from all liabilities related to the proposed acquisition. No 'breakup' or other fees will be paid in connection with this termination.

"Diamond has enjoyed a positive and constructive working relationship with P&G throughout this process, and the mutual termination of our agreement and release of all associated liabilities was reached in the same spirit. Diamond now will put its full effort on the growth of our business with focused execution to continue to build our successful brands."