EAST HANOVER, N.J. -- Oreo has released three flavors to retailers nationwide for the final round of its #MyOreoCreation contest. For a limited time only, consumers can try Cherry Cola Oreos, Kettle Corn Oreos and Pina Colada Oreo Thins; they can vote on their favorite for the chance to win prizes. 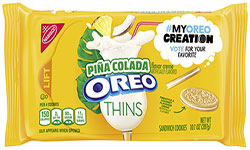 Throughout the #MyOreoCreation contest, Oreo gathered hundreds of fan flavor suggestions and developed custom samples from the various entries, some of which included Coffee & Donuts, Avocado and Unicorn flavored cookies. The brand then selected the final three by judging on taste appeal, creativity and originality.

"We were blown away by not only the volume of flavor ideas we received as part of our #MyOreoCreation contest, but also by the creativity and imagination of our fans," said Pam Clarkson, associate director of North American Oreo Equity. "The response to the contest underscored fan passion around Oreo flavor innovation, and we're thrilled with our three newest limited-edition Oreo cookie flavors. We can't wait for people to try them and let us know which they think should be the winning flavor."

Consumers have until June 30 to cast their final votes and can do so once a day via the brand’s website. The winning flavor will be announced on or around July 7, and the fan who originally submitted it will receive $500,000. The flavor finalists were submitted by customers from Westfield, Mass.; Winnetka, Calif.; and Bellmawr, N.J.