KANSAS CITY, Mo. -- Less than a week after its products returned to retail shelves, Hostess Brands LLC said it is experiencing record demand for its Twinkies and other snack cake products, with sales already seven times greater than historic levels and orders three to six times greater than production capacity, which has already been running at maximum levels. 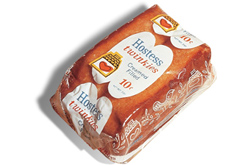 Numerous retailers this week told Hostess that product had sold out within hours of displaying the snack cakes. With 50 million Twinkies and 35 million CupCakes already projected to be on store shelves during the first two weeks of the comeback, new orders have been placed representing an additional 100 million units for just those two snack cakes alone, it said.

"We knew this comeback would be historic and interest would be significant. But the demand has far outpaced even our most ambitious projections," said Rich Seban, president of Hostess Brands. "We are running our bakeries at their fullest capacity and are doing everything possible to make sure we are fulfilling orders to our retail partners as quickly as possible so they can replenish their shelves for eager consumers. We are asking members of the public to be patient. If your store is out of your favorite snack cake, please rest assured that we are doing everything we can to resupply our customers as soon as possible."

Separately, Sara Lee--now owned by Horsham, Pa.-based Bimbo Bakeries USA, is prepping a line of snack cakes for national distribution in August. According to a report by The Chicago Tribune, items include mini crumb cakes and cheese-topped crumb cakes, but also some resembling Hostess favorites, including Twinkie-esque "golden creme cakes" and CupCake-like "chocolate creme cupcakes."

It will sell all of the products in packages of six with a suggested retail price of $3.99, said the report.

Bimbo bought the North American Bakery business from then-Sara Lee Corp. for $959 million in 2011. With brands like Arnold, Brownberry and Entenmann's, Bimbo is the nation's largest baking company.

Sara Lee spun off its international beverage business and changed its name to Hillshire Brands in 2012. The new company is headquartered in Chicago. Hillshire retained ownership of Sara Lee frozen desserts, including its cheesecake.