NEW YORK -- Candy Cane Hershey's Kisses or a sour-apple candy cane from FAO Schwarz are just some of the candy offerings available to shoppers this year, reported the Associated Press. Retailers and manufacturers said candy sales have been brisk this winter, the third largest candy sales season behind Valentine's Day and Halloween. 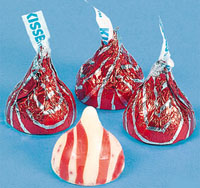 Candy maker and retailer Dylan's Candy Bar also offers a gingerbread kit. Our gingerbread house kit is always a hit every year, said buyer Dana Rodio. A new offering at Dylan's is a chocolate bowl filled with chocolate covered pretzels, a popular hostess gift, according to Rodio. Dylan's own brand of candy canes, which are cherry flavored, are popular as well.

Besides its limited-edition Candy Cane Hershey's kisses, Hershey Co. is also offering limited edition Vanilla-Mint York Peppermint Patties. And for those who like sweets all year round: The new Hershey's Kiss of the Month Club will send members new chocolates each month.

Meanwhile, the Hershey, Pa. candy maker warned of lower profit than expected for 2006, as the company continues to struggle to keep selling the same amount of candy as in the past, reported BusinessWeek.

The company has been taking steps in recent months such as improving its customer support and introducing new products, said the report. Hershey announced on October 19 that it will acquire Dagoba Organic Chocolate, LLC, which it hopes will extend its reach to consumers seeking a superior chocolate experience.

In the meantime, CEO Richard H. Lenny is still announcing setbacks, the report said. Lenny said Hershey's net sales growth will be slightly below its previously forecast long-term 3% to 4% range during 2006. Earnings per share growth from operations will be in the mid-single digits, down from a forecast that the company's increase in diluted earnings per share from operations will be slightly below 9% to 11% growth.

While we're seeing areas of improvement in the U.S. retail marketplace, particularly with selected new products and across key customers, the progress is below expectations, Lenny said in a press release. Further, the costs and business disruption associated with the product recall in Canada have placed additional pressure on the business.

Last month, Hershey recalled products such as Hershey bars, Reese's Peanut Butter Cups and Oh Henry! bars after salmonella bacteria turned up in an Ontario plant. The recall forced the temporary closure of the plant, according to the Associated Press.

Market players were doubtful. Unlike in 2004 and 2005, new products in 2006 have failed to live up to expectations, growth in convenience store penetration has decelerated, and sales of core products have been weak, Morningstar analyst Mitchell Corwin in a research note cited by BusinessWeek. He said Hershey's transition into new product categories such as snack nuts has not been smooth.

Meanwhile, years of reduced spending on advertising appear to have finally caught up with the company. As a result, sales have been pressured this year, and the boost in spending Hershey believes it needs to revive top-line momentum next year will limit margin expansion, Corwin said.

In 07, we expect margins to benefit from improved logistics and supply chain costs, and from facility closures, Standard & Poor's Equity Research analyst Tom Graves said in a research note cited by the magazine. To bolster Hershey's competitive condition, we expect the company will boost marketing investment beyond what we had previously anticipated.