IRVINE, Calif. -- Taco Bell has introduced Doritos Locos Tacos, featuring a shell made out of Nacho Cheese Doritos snack chips. It has the taste of a Taco Bell crunchy taco on the inside, with beef, lettuce and cheddar cheese. 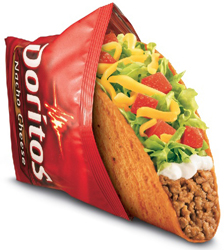 "Taco Bell founder Glen Bell has been recognized for his 'Recipes for Success.' At the top of that list: the best ideas often are the most simple," said Greg Creed, CEO of Taco Bell Corp.

"It was a flavor pairing just waiting to happen," said Creed.

According to Creed, four new production lines were built to handle the proprietary recipe and the demand that consumers had shown in test marketing. Taco Bell has produced more than 50 million Doritos Locos Tacos shells in anticipation of the initial launch.

Doritos Locos Tacos was test marketed for one year in three cities (Bakersfield and Fresno, Calif., and Toledo, Ohio), where one out of every three purchases included the Doritos Locos Tacos. In addition to the test markets, the shell itself was consumer tested at Frito-Lay.

"Glen Bell always listened to the consumer and was an explorer in the industry in terms of helping shape Taco Bell around what the fans wanted. Even before the official launch, the fans have spoken, shouting their love online."

One of Creed's favorite tweets, which will be featured on Doritos Locos Tacos packaging: @Pishoyharoun tweeted "Taco Bell tacos with a Doritos shell?! Genius! Culinary innovation at its finest!"

Initially available in Nacho Cheese, Taco Bell plans to introduce a Cool Ranch version this fall. "With the wide range of Doritos flavors available, the possibilities for this product platform are endless," said Creed, as fans have begun to guess and request future Doritos Locos Tacos shells.

Doritos Locos Tacos TV advertising, created by Draftfcb Orange County, will feature the company's new tagline, "Live Mas," which reflects the brand insight of "if you never do, you'll never know." This insight is further developed in the brand's explorer-type roots, and by shifting from "food as fuel" to "food as experience."

Furthering the engagement, fans will also have an opportunity to share in the excitement for Doritos Locos Tacos through Facebook and Twitter. The Taco Bell Mobile App, which features augmented reality via medium and large cups, as well as the Doritos Locos Tacos Big Box Meal, consumers will be able to connect with the brand and others by viewing a compilation of tweets and Facebook comments. In addition, from March 12 through May 6, several tweets featuring the hashtag #DoritosLocosTacos will be shown on digital billboards in New York City's Times Square and on Los Angeles' Sunset Boulevard. Once a post appears on a billboard, a snapshot will be sent to the creator for download and sharing with friends, and located for viewing on www.doritoslocostacos.com.

Doritos tortilla chips is one of the billion-dollar brands that make up Frito-Lay North America, the $13 billion convenient foods business unit of PepsiCo, Purchase, N.Y. PepsiCo is a global food and beverage leader with net revenues of more than $65 billion and a product portfolio that includes 22 brands that generate more than $1 billion each in annual retail sales. Its main businesses are Quaker, Tropicana, Gatorade, Frito-Lay and Pepsi-Cola.