DALLAS -- The 7-Eleven Inc. global convenience retailing organization raised more than $40 million in donations to assist victims devastated by the March 11, 2011, earthquake and tsunami in Japan.

The international fundraising efforts included canister contributions from 7-Eleven customers, as well as donations from the National Coalition of Associations of 7-Eleven Franchisees, individual franchisees and company employees.

During the months of March, April and May, customers of the retail chain, which [image-nocss] has the most outlets in the world, dropped coins and bills in collection canisters located at approximately 36,000 participating stores around the world.

Dallas-based 7-Eleven is owned by Seven-Eleven Japan, Tokyo, which operates and franchises more than 13,200 stores on the island nation.

"The Japanese people are resilient, and it is evident that our customers, franchisees, suppliers and employees really wanted to support them and assist in rebuilding their lives," said 7-Eleven president and CEO Joe DePinto. "We hope these generous donations by thousands of global citizens and friends of 7-Eleven can help meet some of the basic needs as the Japanese people recover in the years to come."

Funds collected will be directed to organizations that provide rescue and recovery, safety and rebuilding services in the three Japanese prefectures impacted the most--Miyagi, Fukushima and Iwate. 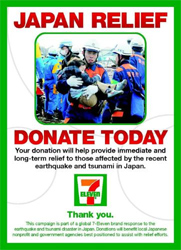