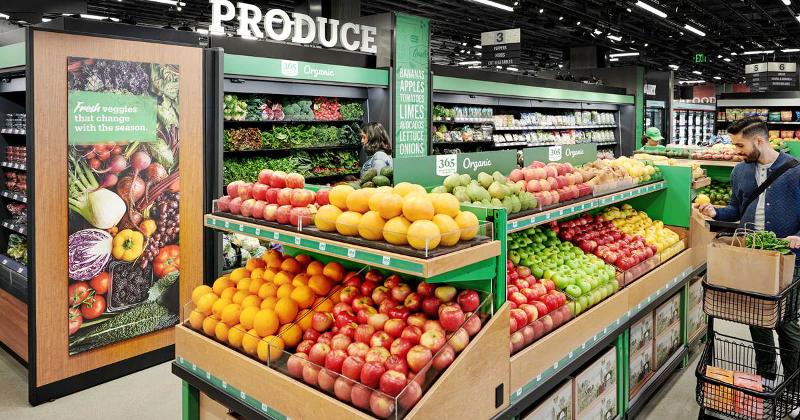 SEATTLE — Amazon has brought its custom frictionless checkout system to its first large-format store in Seattle.

“What Amazon Go did for central business districts—like locating it very close to where people work so you can get breakfast, lunch, snacks—Amazon Go Grocery does the same thing, but closer to home,” said Dilip Kumar, vice president of physical retail and technology for Amazon, to GeekWire. “It’s a new format; it’s not just a bigger Amazon Go. It’s a much more expanded selection that caters to what people are looking for shopping for groceries.”

At 10,400 square feet—including the back of house—the store is about five times larger than standard Amazon Go locations. The grocer stocks about 5,000 items, whereas the smaller Amazon Go stores usually carry 500 to 700 SKUs. The store uses the same meat suppliers as the Amazon Fresh grocery delivery service and shares some organic produce and fish suppliers with Whole Foods Market, according to Bloomberg.

Amazon Go Grocery carries fresh fruits and vegetables that change with the seasons, and a selection of beef, pork, poultry and seafood. Many of the store’s breads, cheeses and baked goods come from local vendors. Shoppers will also find ready-to-heat and ready-to-cook meals for dinner, and a selection of beer, wine and spirits. It offers a mix of organic and conventional items from well-known brands, along with special finds and local favorites.

Additional Amazon Go Grocery locations are slated to open across the United States, as CSP Daily News has previously reported. “This is our first one,” said Cameron Janes, vice president of physical stores, to Bloomberg. “I think we’re going to learn and see where they’re going to work. … High-density residential areas is where we’re starting.”

There are 25 smaller-format Amazon Go stores in Seattle, Chicago, San Francisco and New York. The first Amazon Go opened January 2018 in Seattle, sparking a cross-industry fascination with cashierless checkout technology across the country.

A Peek Inside Amazon Go