ALEXANDRIA, Va. -- Credit card-skimming attacks are on the rise, not just at ATMs, but also at points of sale. For the petroleum and convenience-store industries, most of the pain is being felt at the pump, namely the self-service pay-at-the-pump. 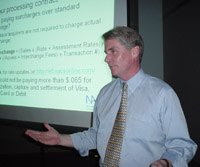 Gray Taylor, a security and compliance expert for the National Association of Convenience Stores, Alexandria, Va., said the primary reason for the rise in pay-at-the-pump skimming attacks relates to the security measures retailers have implemented elsewhere in the payments chain. They've taken steps to lock down point-of-sale systems within their stores, ensuring networks are complying with data-security standards, such as the Payment Card Industry Data Security Standard, according to a report from Bank Info Security. So fraudsters have adjusted their targets, aiming for the lowest hanging fruit: unattended self-service terminals.

"The retail community is forcing these gangs to move downstream, to more contact where they can collect data," Taylor said.

Merchants are taking precautions to fight the growing number of skimming attacks the industry continues to face, but there is only so much they can do.

"We're spending billions of dollars every year, the merchants, trying to fix a broken system, and at some point, we have to make the choice that this just can't be fixed and needs to be revamped, and I think we're getting there," Taylor told the website. "The mag-stripe, because it is there on the card and because you can now use that ‘track 2’ data to buy things online, now we have to secure this entire data system around it. ... It's a broken system."

During a recorded interview with Bank Info Security, Taylor discusses:

Taylor has worked in the convenience-store industry since 1963, when his family opened its first of 87 convenience stores. Taylor later founded a fuel-retailing business and a store-based consumer banking/debit system, the first service of its kind to be offered by a retailer. Since selling his retail interests, Taylor has been involved on a variety of projects, including recapitalization of a public alternative fuels company, heading global product management for several of the world's largest petroleum equipment and retail systems suppliers, and serving as vice president of research and technology for NACS.