CHICAGO -- As technology becomes more accessible in terms of price and capability, suppliers on the trade show floor at the NACS convention earlier this month were focusing on helping retailers access their sales data, spot meaningful trends and entice customers with relevant promotions and loyalty offers. 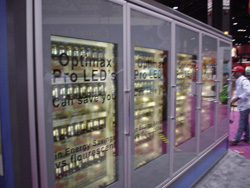 Regarding loyalty offers, Catalina Marketing, Chicago, along with Outsite Networks, Norfolk, Va., is coming to retailers with a system that produces coupons to customers based on their buying habits. The strategy is to offer retailers the "plug-and-play" devices for free, but approaching the larger chains in its initial push.

Darren Moss, vice president of c-store marketing for Catalina, said initial tests have shown higher-than-average redemption rates, volume lifts in brands promoted and no slow down in the payment process. Anton Bakker, president and CEO of Outsite, said the system has benefits for manufacturers too. Now that the partnership has provided scale, Bakker said they can offer manufacturers branded loyalty programs tied to their signature products.

Here's a rundown of what many vendors had to offer on the trade show floor at NACS 2011 convention:

Thomas Pierce, chief marketing officer, and Steve Rathgaber, CEO for the Houston-based company, spoke with me about its "free" ATM network called "Allpoint."

Executives for the Charlotte, N.C.-based company, Greg Peele, Don Robinson and Pete Griffiths talked about how cmi has merged with Petrocycle, a wholesale petroleum software firm. Griffiths, who spoke from the Petrocycle perspective, said the two companies had strengths that the other needed, so the merger was a natural fit.

Ken Patton, vice president of merchant solution sales for the Brentwood, Tenn.-based company, said they were introducing a POS solution, having been in the fleet and trucking industry for years.

Paul Metko, president of the of the Appleton, Wis.-based company said a strong backoffice solution can offer retailers data on item movement and inventory.

The Greensboro, N.C.-based company was showing its Applause TV retrofit with a concept version of Google wallet mobile payment. The company has also integrated with the LIFT systems (LIFT is an Atlanta-based company) that aids in cashier-customer interaction with Gilbarco's WISDOM solution. On the Veeder Root side, Cal Tanck was showing retailers web-enabled tank gauges.

Tim Lindblom, vice president of the Clearwater, Fla.-based company said its systems tie all the electronic data-gathering devices (tank monitors, POS, coolers, video, etc.) together, providing data in real time, so a manager can identify suspicious activity many times while the cashier in question is still on his or her shift.

Bob Stein, with the Florham Park, N.J.-based company, spoke of buying MPSI, which now allows KSS Fuels to do site analysis along with its fuel-price optimization solution.

An integrated software solution that uses hardware from multiple vendors is how Jamie Gray describes the Laval, Quebec-based company.

Stephenie Derrick, franchise development manager for the Ft. Worth, Texas-based company said Mr. Payroll has evolved from its roots in check cashing into multiple financial services.

Greg Gilkerson, president of the Temple, Texas-based company, spoke to issues of item-level inventory and how it's important to move past the hurdle of "cultural change"  when going from retail cost accounting to item level. "Retailing is fraught with abuses and misinformation," he said, especially about the actual value of the inventory on hand.

Nate DaPore, president and CEO of the Charleston, S.C.-based company, said a new addition to their human resources solution is coming out in February 2012.

Bob Johnson, president of the Arlington, Texas-based company, said loyalty is an ongoing conundrum for retailers, especially in figuring out how loyalty will pay for itself as well as how mobile payment will work. But he said the rewards are worth the effort, noting how loyalty programs based on a retailer's sales data are powerful tools.

Brad Prizer, vice president of marketing for the Plano, Texas-based company spoke of the company's loyalty solution, mobile applications and the potential of "cloud" solutions.

Melanie Squires with the Surprise, Ariz.-based company said part of their differentiation comes with their "dot net" platform, which has led them to provide an iPad option. It gives retailers real-time accessibility to its backoffice solution.

Tidel Engineering
Ed Grondahl with the Carrollton, Texas-based company, said they have three new types of safes, each with its own configurations, cassette sizes or additional vault areas. One area it is working on is coin recycling.

David Ezell of the Clearwater, Fla.-based company talked of a "line-busting" POS device. The handheld unit would allow for a card swipe as well as a personal identification number (PIN) pad.

Tim Weston of the Austin, Texas-based company talked about its forecourt control system "Fusion" and its encryption capability.