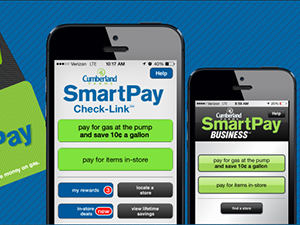 Available as both a payment card and a mobile-payment app, the program automatically saves users 10-cents per gallon. It’s free to join and use, the company said in a statement.

Besides the cents off gasoline, SmartPay mobile-app users receive a free Farmhouse Blend coffee, free Chill Zone beverage or free bottle of water for every 40 gallons of gas purchased.

To date, Cumberland Farms has given away more than 2.5 million free drinks via SmartPay Rewards. Cumberland Farms major suppliers also provide free coupons on a range of in-store products with the rewards program.

“[In January 2013], SmartPay was an entirely new concept, so it’s incredible to see that we have already hit the $50 million mark in terms of customer savings through the program,” said Ari Haseotes, CEO of Cumberland Farms, Framingham, Mass. “Our customers absolutely love the program, and we get thousands of new customers every week, mostly from word-of-mouth referrals by existing customers.”

As the nearly 600-store chain continues to employ technology and mobile payments in the convenience-retail space, its multiyear remodeling initiative also has lent a hand in reinventing the New England network. The initiative, which began in 2009, includes a major overhaul of all of Cumberland Farms’ chain with a larger, modernized store design, an expanded food offering and more gas pumps.

The retailer’s new look also is driving major growth, the company said, and foot traffic has significantly increased in all eight states that have new or newly remodeled Cumberland Farms stores.