NEW ORLEANS -- After seven months of testing, the Cumberland Farms convenience store chain is ready to roll out its SmartPay mobile-payment system to all of its 600 stores in the Northeast and Florida and expand its use. 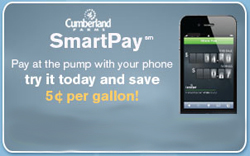 "We love it. We're going to triple down on it in January and roll it out to all 600 sites," said David Banks, CIO of Cumberland Gulf Group, during an education session at SIGMA's 2012 Annual Meeting in New Orleans.

After two years on the design table, Cumberland Farms introduced the PayPal-linked SmartPay system at 50 stores in March 2012. It currently is in use at 200 Cumberland Farm stores. The mobile app allows customers to pay for gasoline through online-payment system PayPal using a smartphone.

Since the introduction, Cumberland Farms has seen steady growth in both the number of downloads (20,000 in 28 weeks) and the number of gallons of fuel paid for through the app (650,000 gallons).

"It generated way more interest than we expected," Banks said. "Anything with mobile payment, people are all over it. … It's a very hot space."

It appears to drive loyalty, as well, according to Banks, who noted that on a typical day, more than 80% of SmartPay transactions are done by repeat customers.

"It's also a ready-made fleet-fueling program," he said, noting that small businesses have been signing on. "There's no card, so anyone who knows the company's PayPal password can use it. They get a monthly statement from PayPal, and they can see all their gas purchases for the month."

As part of the wider rollout, Cumberland Farms also is expanding the possible use of the payment method, making it available for in-store purchases. A revised structure should also help the chain minimize interchange fees. "We're looking at a way to cut credit-card fees completely out of it," Banks said without expanding on that end of the system.

Framingham, Mass.-based Cumberland Gulf Group developed the SmartPay mobile app working with PayPal to take advantage of PayPal's extensive client list, drive loyalty and begin the process of cutting out credit-card fees. Consumers using the app typically get a discount at the pump when paying with SmartPay.