GLENDALE, Ariz. -- With smarter, more complex cellphones becoming the norm, the advent of digital forms of payment--inclusive of digital gift cards--is changing the look and feel of the prepaid category, said one industry provider. 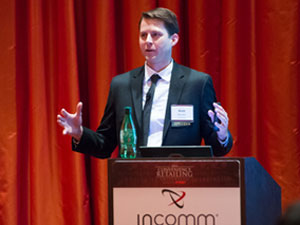 Leading a session at CSP's Convenience Retailing University (CRU) conference, Matt Merker, national sales director for InComm, Atlanta, told attendees that digital opportunities can give retailers the ability to increase what they offer without needing to expand the category's physical footprint.

"With digital, there's an opportunity to have instant access to an expanded catalog of digital prepaid products and to decrease out-of-stock items," Merker said.

The opportunity rides on a growing trend of consumers opting to buy gift cards, phone time and other products traditionally found in the "prepaid" category through digitally methods like mobile phones, tablets or desktops.

Citing numbers from the Portland, Ore., company Giftango that InComm acquired last year, Merker said that for the first time ever, the purchase of digital gift cards over the Dec. 2013 holiday time frame outpaced physical cards 57% to 43% among Giftango card issuers. It's a trend that will only continue to gain momentum, he said.

In 2012, consumers spent about $22 billion in mobile-commerce purchases, he said quoting statistics from the Mercator Advisory Group, Maynard, Mass. That volume was expected to double in 2013, surpassing $50 billion.

Mobile viewing of electronic gift cards was also on the rise, with almost 30% of cards now viewed first on a mobile device rather than a web browser.

When asked where the retailer fits in the equation, Merker said a lot of thought is going into how the retailer facilitates the gift card purchase going forward. Admittedly, a consumer could stay at home and perform a digital transaction directly with the gift-card issuer, but he said that the transaction at the store was an important step for InComm to develop. Ultimately, such cards offers would have to evolve where all stakeholders receive benefit.

It's an important trend to watch, he said, as more and more consumers are using general purpose reloadable (GPR) cards to fund transactions, another trend InComm said is on the rise.

Merker said another changing area was the prepaid phone card. As consumers move to "no contract" wireless plans, the idea of prepaid evolves to something similar but different at the same time. Carriers are offering such plans--which are still actually pay-before plans but are cheaper while still offering similar service to both the old prepaid offers and post-pay plans--and it seems to be a hit with consumers, he said.