WASHINGTON -- The National Association of Convenience Stores (NACS), along with several merchant associations and companies, filed a writ of certiorari on Aug. 18 with the U.S. Supreme Court asking the court to hear its appeal of the DC Circuit Court of Appeals ruling that upheld the Federal Reserve's debit-card interchange fee rules. 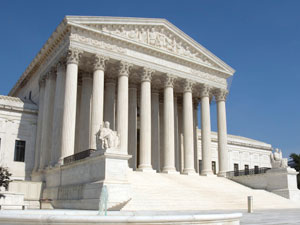 NACS challenged the Fed's swipe fee rules soon after they became effective in 2011. The U.S. District Court agreed with NACS that the Fed's rules did not follow the law, but the DC Circuit disagreed. That is why NACS has asked the Supreme Court to decide the case.

"Debit swipe fee reform was needed to address the price-fixing of debit swipe fees that the giant card companies engaged in for the nation's largest banks," said NACS president and CEO Henry Armour. "Unfortunately, the Fed overrode the language of the law and blunted the positive impact of reform. We need the Supreme Court to decide this case so that American merchants and their customers stop paying billions of dollars more than they should per year to the big banks."

The Fed initially proposed a debit swipe fee rule that was largely consistent with the law passed by Congress. It limited price-fixing by the card companies and largest banks to reduce debit-card swipe fees that merchants and their customers pay. After heavy lobbying by the banks, however, the Fed abruptly changed its view of the law and dramatically inflated the amount of the fees that the big banks could charge. This resulted in the fees that many businesses pay actually going up rather than down, NACS said.

NACS and the other groups filed suit to challenge the Fed's rule because it does not follow the law. U.S. District Court Judge Richard Leon agreed with NACS and struck down the Fed's rule in July 2013.

Leon found that the Fed's rule ran "completely afoul of the text, design and purpose" of the law. While the DC Circuit disagreed with Leon, NACS said it believes the DC Circuit overlooked the key language in the law prohibiting certain costs from being included in the price of swipe fees and applied the wrong legal standard to the case. It will now be up to the Supreme Court whether it will agree to decide a case that affects prices that consumers pay more than 100 million times every day.