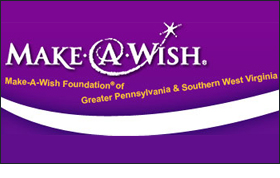 The donation will help the foundation grant the wishes of children with life-threatening medical conditions. Rutter's made the donation in honor of its customers in lieu of Christmas presents, it said.

The Make-A-Wish Foundation of Greater Pennsylvania & Southern West Virginia was once four chapters that now operate [image-nocss] jointly. It includes 57 counties in western, central and northeastern Pennsylvania and 23 counties in southern West Virginia. The chapter is headquartered in Pittsburgh and has six regional offices in Charleston, W.Va., and Erie, Pottsville, Punxsutawney, Wilkes-Barre and York, Pa. The president and CEO is Judith Stone.

Todd Rutter, president of Rutter 's Dairy, is on the board of directors of the Make-A-Wish Foundation of Greater Pennsylvania & Southern West Virginia.