PLEASANTON and SAN RAMON, Calif. -- Albertsons Cos. LLC and Chevron Products Co., a division of Chevron USA Inc., are expanding their joint fuel-rewards program to customers in parts of Florida, including the Clearwater, Orlando and Fort Lauderdale markets. 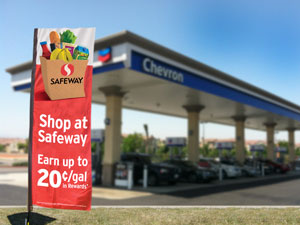 Customers who earn reward points by shopping at three newly rebranded Safeway supermarkets in Altamonte Springs, Largo and Oakland Park, Fla., can use those points for up to 20 cents off per gallon when filling up at approximately 20 participating Chevron and Texaco gas stations in the state.

“Our fuel-rewards program has been popular with customers for years, and it wasn’t a question of if or when we would do it, but how quickly we could get it rolled out for our shoppers here in Florida,” said Steve Burnham, eastern division president, who also oversees the Florida Safeway district.

Chevron began working with Safeway in late 2012. “We’re building on a foundation of success with Albertsons Cos.,” Doris Lee, head of loyalty for Chevron, told CSP Daily News. “It’s simple and it’s proven not only for our consumers, but also for our retailers and our marketers, and so in a market like Florida, where Albertsons is opening three new Safeways, we just think it’s a great combination of two leading brands, and with the strength of both of our retail networks.”

“We’re looking to replicate the same success we have seen in our other markets in partnership with Chevron in our newly expanded Florida markets,” Vivek Kalpande, group vice president of digital and loyalty programs for Albertsons Cos., told CSP Daily News. “We think that this program delivers value in terms of additional savings at the pump for the customers in an innovative, convenient way when they are doing their regular grocery shopping in a Safeway store.”

Customers can register for the program at Safeway.com or by downloading the Safeway app. Under the fuel-rewards program, for every 100 reward points earned by shopping at participating Florida Safeway stores, customers receive a 10-cent-per-gallon gas reward, up to 20 cents per gallon. Customers earn reward points every time they use their registered phone number while shopping at one of the three Safeway stores.

Customers receive one point per $1 spent on eligible grocery purchases, two points per $1 spent on qualifying gift cards and one point for every out-of-pocket-cost dollar spent on pharmacy, including co-payments. They redeem their fuel rewards by entering their registered phone number at the pump or inside the convenience store before fueling.

“We have integrated marketing programs that we developed together, both Albertsons Cos. and Chevron, and so we’ll definitely have a lot of signage and support at our stations and at Safeway stores,” Teena Massingill, director of corporate public affairs for Albertsons Cos., told CSP Daily News. There will also be radio, online and in-store advertising.

More than 900 of Albertsons Cos.’ 2,300 stores offer the fuel rewards program to shoppers and more than 2,800 Chevron and Texaco stations participate in the program. It is also available in Safeway, Vons, Pavilions and Carrs stores located in Alaska, Arizona, California, Hawaii, Nevada, Oregon and Washington.

Safeway’s eastern division operates 125 stores, including three Safeway stores in Florida. Safeway is part of the Pleasanton, Calif.-based Albertsons Cos. family of stores. Albertsons, one of the largest food and drug retailers in the United States, operates grocery stores in 35 states and the District of Columbia under 19 banners including Albertsons, Safeway, Vons, Jewel-Osco, Shaw’s, Acme, Tom Thumb, Randalls, United Supermarkets, Pavilions, Star Market, Haggen and Carrs.