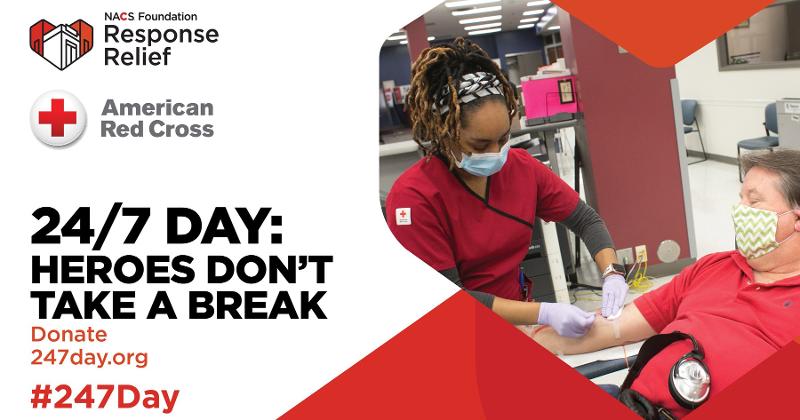 Photograph courtesy of the NACS Foundation

ALEXANDRIA, Va. — More than 30,000 convenience and fuel retailers are participating in 24/7 Day to recognize first responders, medical personnel and American Red Cross volunteers, according to the NACS Foundation.

The annual event, in its second year, is held on July 24 and hosted by the NACS Foundation to help raise awareness and donations for the urgent humanitarian needs of the Red Cross. It also spotlights the c-store industry’s role in supporting local heroes in the communities they serve, according to the foundation.

"Convenience stores are often seen as the first supporters to first responders—serving as the only locations that remain open in a crisis and ensuring that fuel, food and other necessities are available for emergency workers and customers seeking a return to normalcy,” said Stephanie Sikorski, executive director at the NACS Foundation. “And with their extended hours of operation, our stores are often the only place open to serve first responders and medical personnel working overnight.”

About 93% of Americans live within 10 minutes of one of the 152,720 c-stores in the United States, according to the foundation. The industry serves 165 million customers per day and donates more than $1 billion a year to charitable causes.

C-stores are supporting 24/7 Day in their own unique ways, including offering free in-store deals to first responders, medical personnel and Red Cross volunteers. National video network GSTV is also supporting the foundation’s #247Day social media campaign via an awareness video at fuel dispensers across the country.

The public can take part by donating to the American Red Cross, visiting 247Day.org to find a list of participating stores, visiting a participating c-store on July 24 and sharing a #WeHeartHeroes story on social media to honor a first responder.

"Each day, families rely on community heroes for support during disasters and other crises," said Don Herring, chief development officer for the Red Cross. "That's why we are so grateful for this partnership to help ensure people don't face emergencies alone.”

The NACS Foundation is the charitable arm of NACS, Alexandria, Va. Founded in 1961 as the National Association of Convenience Stores, it is a global association dedicated to advancing convenience and fuel retailing.

Pennsylvania to Provide $10 Million in Grants to C-Stores, Other Food Retailers