READINGTON, N.J. -- For the 24th consecutive year, QuickChek is returning as title sponsor of the annual New Jersey Festival of Ballooning, the largest summertime hot air balloon and music festival in North America. 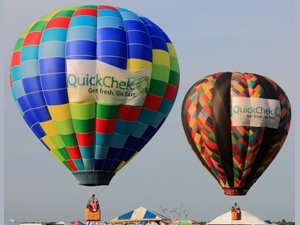 The Whitehouse Station, N.J.-based convenience-store chain’s sponsorship of the event is the longest-running sponsorship of any festival in the United States.

This year’s QuickChek New Jersey Festival of Ballooning in Association with PNC Bank--an international attraction featuring twice-a-day mass ascensions of 100 balloons from around the world with a major headlining concert series--runs July 29 through July 31, 2016, at Solberg Airport in Readington, N.J.

“This annual event has an amazing impact on Hunterdon County’s tourism industry,” said Lieutenant Governor Kim Guadagno. “It is not surprising that the festival has been repeatedly acknowledged as a Top 100 Festival in North America by the American Bus Association. I encourage both residents of New Jersey and surrounding areas to attend and experience this showcase event.”

QuickChek has maximized its sponsorship of this three-day event into a nine-month long partnership. QuickChek c-stores serve as the festival’s exclusive retail ticket outlet, creating savings opportunities for consumers on food, beverages and tickets in the months leading up to the festival.

“The balloon festival is our No. 1 branding event,” said QuickChek CEO Dean Durling, whose family-owned company operates 143 convenience stores throughout New Jersey, the Hudson Valley and Long Island. “It has proven to be a highly effective way to introduce consumers to our brand and deliver our message of providing restaurant-quality food and the best cup of coffee on the market at a great value, as well as our outstanding customer service. It truly is a showcase event for us.”

It paired the Q Café with a large, onsite 2,700-square-foot, air-conditioned replica store where festival attendees could order from the chain’s menu. The company also had a hospitality tent for families to relax together in between balloon ascensions and concerts.

“QuickChek is an excellent example of how a company continues to connect with its customers, attract new ones and integrate all facets of its corporate mission,” said festival executive producer Howard Freeman.

The festival has an economic impact of $42.7 million on the state’s travel and tourism and local economies and brings positive recognition to the state through the worldwide media attention it receives. The event has raised more than $2.55 million for local charities, non-profit organizations and children’s hospitals since The Festival Group and QuickChek came together in 1993.

‘All That’s Great in the Garden State’

How QuickChek Gets the Most Lift From Balloon Festival