SAN ANTONIO, Texas -- Valero Energy Corp. and participating Valero-branded gas stations are partnering with Paramount Pictures for a "Rumble with Bumblebee" sweepstakes for a chance to win a new 2014 Camaro as the grand prize. Also, one first-prize winner will receive a private hometown screening of Transformers: Age of Extinction, the fourth film in director Michael Bay's franchise, opening June 27. 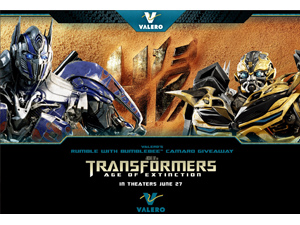 "We are excited to partner with such a phenomenal movie," said Gary Arthur, senior vice president of wholesale marketing for Valero. "With fans of all ages, Transformers is a great fit for Valero consumers."

By registering for the sweepstakes at www.valerosweeps.com, participants also get a chance to instantly win a $10 Valero fuel card and play daily for a chance to win a private hometown screening by collecting pieces to build their very own Bumblebee and Optimus Prime Transformers. Participants can check in with mobile devices at participating Valero-branded locations to earn 100 bonus entries for the grand prize per week. Registration is also available via mail-in entry. There is no purchase necessary to enter.

The "Rumble with Bumblebee" sweepstakes will also be featured in Valero's national ad campaign with a TV commercial featuring its partnership with Transformers: Age of Extinction.

Valero, through its subsidiaries, is an international manufacturer and marketer of transportation fuels, other petrochemical products and power. Its assets include 16 petroleum refineries with a combined throughput capacity of approximately three million barrels per day, 11 ethanol plants with a combined production capacity of 1.3 billion gallons per year, a 50-megawatt wind farm and renewable diesel production from a joint venture. Through subsidiaries, Valero owns the general partner of Valero Energy Partners LP, a midstream master limited partnership (MLP). Approximately 7,400 gas stations and convenience stores carry the Valero, Diamond Shamrock, Shamrock and Beacon brands in the United States and the Caribbean; Ultramar in Canada; and Texaco in the United Kingdom and Ireland.