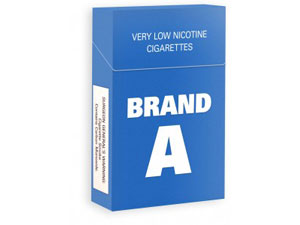 The application to the FDA requests that Brand A packaging and marketing be allowed to disclose to consumers that the company’s proprietary Very Low Nicotine cigarettes reduce smokers’ exposure to nicotine.

Without any artificial extraction or chemical processes, 22nd Century's Brand A cigarettes are made with proprietary VLN tobacco grown on independently owned farms in the United States, it said. The finished cigarettes have the taste and sensory characteristics of conventional cigarettes, but contain only trace amounts of nicotine, it said, so that smokers’ exposure to nicotine is drastically reduced.

Under Section 911 of the federal Food, Drug & Cosmetic Act, a tobacco product may not be introduced for commerce in the United States if the label or advertising represents that the tobacco product contains a reduced level of a substance or a reduced exposure to a substance unless given specific approval to do so by the FDA.

“The scientific testing conducted in support of our submission to the FDA shows conclusively that Brand A, as compared to conventional tobacco cigarettes, provides smokers with drastically reduced exposure to nicotine,” said Henry Sicignano III, president and CEO of 22nd Century Group. “We believe that the public health implications of a virtually nicotine-free tobacco cigarette are enormous."

Unlike so-called “light” or “ultra-light” cigarettes (those terms are now banned by the FDA from labeling and marketing in the United States), 22nd Century’s proprietary Brand A cigarettes are designed to deliver greatly reduced ratios of nicotine to other smoke components, said the company.

The company cited an Oct. 2015 clinical study in The New England Journal of Medicine. Led by the Center for the Evaluation of Nicotine in Cigarettes, the double-blind, parallel, randomized clinical trial involved 840 smokers at 10 locations who were randomly assigned to smoke for six weeks either their usual brand of cigarettes or one of six types of investigational cigarettes.

"This study provides preliminary short-term data suggesting that as compared with the nicotine content of conventional cigarettes, a substantial reduction in nicotine content is associated with reductions in smoking, nicotine exposure and nicotine dependence, with minimal evidence of nicotine withdrawal, compensatory smoking or serious adverse events," said the report.

Clarence, N.Y.-based 22nd Century is a plant biotechnology company focused on technology that allows it to increase or decrease the level of nicotine in tobacco plants and the level of cannabinoids in cannabis plants through genetic engineering and plant breeding. The company owns or exclusively controls more than 200 issued patents and more than 50 pending patent applications around the world.