WASHINGTON -- The Food & Drug Administration (FDA), which was recently dealt a blow in its effort to regulate electronic cigarettes as medical devices, has filed a petition to ask the entire U.S. Court of Appeals for the District of Columbia Circuit to hold a new hearing and review its appeal, reported The Wall Street Journal. That appeal was rejected December 7 by a three-judge panel.

At issue is how the FDA should regulate a nascent industry whose products have caught on with thousands of smokers who are seeking an alternative to their daily habit, said the report. E-cigarettes are battery-powered tubes that turn nicotine-filled liquid into a vapor mist.

The appellate panel ruled that e-cigarettes should be regulated as tobacco products by the FDA, unless marketers make specific claims that the devices help smokers quit or provide other remedies.

The agency contends that e-cigarettes are drug or medical devices that require preapproval from the FDA, much like nicotine gums, patches or sprays. The agency began intercepting shipments of e-cigarettes from China two years ago, which triggered a lawsuit by the fledgling industry, the report said.

Sottera Inc., an Arizona e-cigarette distributor that joined the lawsuit as a plaintiff and some of its rivals say their products are merely recreational alternatives to cigarettes and that they have not marketed them as tools to wean people off nicotine. The industry's annual sales are estimated at more than $100 million, said the report.

The appeals panel upheld a January ruling by a district judge, who granted a preliminary injunction to the e-cigarette distributors who sued the FDA. On Monday, the agency asked the full appellate court to reinstate a stay of the preliminary injunction, pending its request for a rehearing of the case.

In its court papers, the FDA argued that the three-judge panel's decision "rests on a clear error of law and will undermine" objectives that were laid out by Congress when it passed legislation in 2009 that empowered the FDA to regulate tobacco products for the first time, the Journal said. 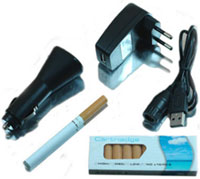