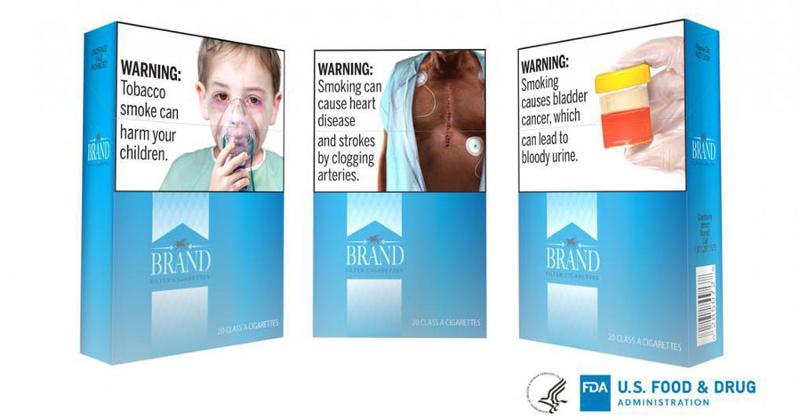 WASHINGTON — The U.S. Food and Drug Administration (FDA) has issued a proposed rule to require new health warnings on cigarette packages and in advertisements, which the agency says would “represent the most significant change to cigarette labels in more than 35 years.”

The proposed warnings feature photo-realistic color images depicting some of the lesser-known health risks of cigarette smoking, including bladder cancer, diabetes, erectile dysfunction and conditions that can cause blindness.

Health warnings first appeared on cigarette packages in 1966 and were most recently updated in 1984 to include the surgeon general’s warnings that now appear on packages and in advertisements.

“Research shows that these warnings have become virtually invisible to both smokers and nonsmokers—not attracting much attention and not leaving a very memorable impression of the risks of smoking,” the FDA said. “The unchanged content of these health warnings, as well as their small size, location and lack of an image, severely impairs their ability to convey relevant information about the negative health consequences of cigarette smoking in an effective way to the public.”

Participants in the FDA's consumer research reported that the information provided by the 13 proposed cigarette health warnings was both new to them and that they learned something from the proposed warnings when compared to the current surgeon general's warnings on cigarette packages and in advertisements. Based on the findings, the proposed new warnings, each comprising a text statement and corresponding photo-realistic image in full color, include:

The proposed rule will be open for public comments for 60 days through Oct. 15. Among other things, the FDA is seeking comments on the proposed cigarette health warnings and how many warnings should be selected for the final rule. The agency is also seeking proposals for alternative text and images, as well as scientific information to support a finding that the alternative text and images would advance the government interest in promoting greater public understanding of the negative health consequences of smoking.

Tobacco Regulations and the ‘War on C-Stores’

A Look at Warning Labels