CHICAGO -- Last week’s Society for Research on Nicotine and Tobacco Conference included numerous tobacco and nicotine-related presentations, most notably select data from the first wave of the U.S. Food and Drug Administration (FDA) and National Institute of Health’s Population Assessment of Tobacco and Health (PATH) study. 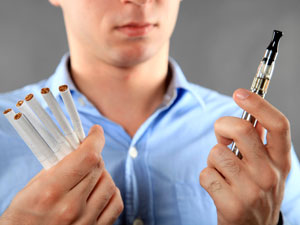 “E-cigs were a big topic in the PATH study, along with many other presentations, as the regulatory and scientific communities try to get a better grasp of the implications from this innovation, Vivien Azer, a tobacco analyst at the New York-based Cowen Group, wrote in a research note.

PATH is a longitudinal study, first mandated in 2011, in order for the FDA to gain a better understanding of tobacco use. About 46,000 U.S. tobacco and nontobacco users participate, all above the age of 12. The first wave of the study began in 2013 and was presented at the conference.

The data suggested regular use of electronic cigarettes is still very low, with just 5.5% of adults and 3.1% of 12- to 17-year-olds having used e-cigs in the past month. Azer added that daily e-cig users make up a very small percentage of these 30-day e-cig users.

“In fact, among current adult e-cig users, more than 40% had only used an e-cig less than three times in the past 30 days,” she said. “We believe [this] points to the continued lack of consumer adoption of the products.”

“Overall, 15.9% of adult current e-cig users were nicotine naive,” Azer said. “While a smaller 8.5% of daily e-cig users had not previously used tobacco.”

In terms of flavors in e-cigs and other tobacco products, PATH researchers found the use of flavors was most prominent in e-cig users across the board. For e-cig consumers 25 years and older, 63% reported using flavors, while 85% of e-cig users ages 12 to 17 reported using flavors (though Azer noted this youth group exhibited a strong flavor preference across all tobacco categories).

Azer said the Wave 1 database is currently only available for restricted use, but full dataset will be available later this year. The second wave of data is currently being reviewed, and Wave 3 is 40% complete. PATH researchers announced last week that the study will be extended four years and will now include seven waves, with the final wave set to be completed in 2022.

“We view the extension of the study as a positive (given the agency will take time to evaluate findings from the study and could potentially push back any incremental regulations),” Azer said.