NEW YORK -- Electronic-cigarette sales have hit a slight bump in the road, but they keep on truckin’ ahead, according to the latest data Nielsen data tracking the convenience store channel. 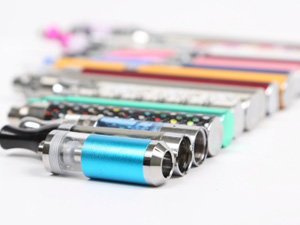 The top players appear firmly entrenched, with little leapfrogging noted during the most recent four-week cycle.

The good news is that e-cig category growth continues to be solid and dollar sales are relatively strong, as evidenced by $45.1 million in c-store sales and $11.8 million in Nielsen’s XAOC expanded all outlets combined channel (which includes grocery, drug, and hypermarts) over the latest four weeks tracked. According to Bonnie Herzog, senior tobacco analyst for Wells Fargo Securities LLC in New York City, this suggests approximately $750 million in annual sales among all of Nielsen’s tracked channels.

Combined with online sales, estimated as high as $625 million, as well as non-Nielsen-tracked channels (boutiques, vapor shops, etc.), Herzog said the category is currently valued at roughly $1.85 billion, underscoring a robust industry. In fact, Herzog continues her bullish forecast that e-cig consumption could overtake combustible cigarettes and the combined operating profit pool could produce a compounded annual growth rate exceeding 7% over the next 10 years.

“The most recent Nielsen data indicates that the e-cig category is decelerating based on scanner data, but I think it’s a bit misleading,” said Herzog. “The broad e-vapor category is still growing and accelerating. Plus, we’re seeing growth from online sales, nonmeasured channels such as vape shops, and increasingly popular vapors, tanks, and open-system vapor products, which could be somewhat marginalizing ‘cig-alike’ e-cigs but incrementally growing the overall e-vapor category.”

And there’s another plus, she added. “E-cig annual growth continues to top 20%, with 31% more shelf space being devoted to e-cigs, based on results of a fourth-quarter 2013 U.S. retailer survey published by Wells Fargo in January.”

“A lot of other product categories in the c-store channel would love to have dollar-sales growth of 45% for the most recent four-week period,” Marston said.

“The effort to compete for the adult smoker is a marathon, not a sprint, and utilizing syndicated data to assume what the trends are nationally may be problematic in a nascent category,” said Vito Maurici, senior vice president of sales and distribution for Scottsdale, Ariz.-based NJOY.

Brian May, spokesman for Altria, is encouraged by his company’s own research, which indicates that approximately 50% of adult cigarette smokers are interested in innovative types of tobacco products, including e-vapor products.

“Increased awareness and trial of e-cigarettes have driven category growth, and we estimate that 90% of adult smokers are aware of e-vapor products and about two-thirds have tried them,” said May.

For Nik Modi, managing director for RBC Capital Markets in New York City, the elephant in the room remains the fact that smaller manufacturers continue to face an uphill battle in gaining distribution at national retail chains, especially as Big Tobacco gets involved in the national market.

“Lorillard’s push to take blu from 10,000 retail outlets to 136,000 in a little over a year was partly driven by their extensive retail distribution network, which enabled them to get the product into retail accounts that also carry Lorillard cigarettes,” said Modi. “Also, the big-three cigarette manufacturers have the resources to enter into distribution agreements with their retail partners that incentivize the retailer—via rebates, discounts, better allocations, etc.—to carry their e-cigarette brands at the expense of others.”

Not having a history with other product offerings and being an e-cig maker exclusively are other barriers to entry for some players trying to establish a presence in c-stores, said Carlos Bengoa, president of CB Distributors Inc., Beloit, Wis.-based makers of 21st Century Smoke.

“There will ultimately be four to six major players involved in the electronic-cigarette market,” Bengoa said. “They must have the cash reserves, marketing ability, product liability protection, product quality and mix as well as innovation to survive.”

A recent trend analysts and some manufacturers are paying close attention to is the consumers’ gradual gravitation toward rechargeables over disposables.

“Rechargeable kits offer a tempting value for shoppers, who can often buy a 5-pack of rechargeables for around $20 compared to one disposable retailing for $10,” said Miguel Martin, president of Logic Technology, Pompano Beach, Fla.

Modi said a continued move toward rechargeable purchases is positive for the category, as it implies repeat usage by consumers.

For the e-cig category to continue to flourish, however, more innovation is needed.

“We’ve come a long way,” said Herzog of Wells Fargo, “but further technological innovation is critical to reaccelerate growth, whether it’s a better experience for consumers and/or improved battery life.”

Despite the aforementioned challenges, Logic’s Martin predicts that 2014 will be a “very good year” for e-cigarettes, especially as retailers and wholesalers become aware of their profit opportunities in this category and dedicate more top-down space for the products.

“Every retailer is trying to address declining volumes in cigarettes, and many have turned to foodservice to fill the gaps,” he said. “But electronic cigarettes give them a much easier transition with higher margins.”

To ease that transition, retailers should be focused on selling products that are building their e-cig brands to drive adult-smoker awareness and traffic into their stores, said Maurici.

In the short term, “you may see less inventory for some new products displayed to make room for new SKUs at c-stores,” said Jason Healy, blu eCigs president, Charlotte, N.C., “but, by and large, retailers don’t necessarily need to sacrifice existing revenue from other product lines to make room for e-cigarettes.”