ROCKVILLE, Md. -- Much-anticipated changes to a report that could point to the fate of menthol cigarettes were released late Thursday with little effect to the original opinion, much to the relief of the tobacco industry and investors. The Food & Drug Administration's Center for Tobacco Products released an annotated version of the Tobacco Products Scientific Advisory Committee's (TPSAC) "Menthol Cigarettes & Public Health: Review of the Scientific Evidence& Recommendations."

As first reported in a CSP Daily News/Tobacco E-News article early last week ([image-nocss] click here), the annotations were of an editorial nature, and did not change TPSAC's conclusions or recommendations. Upon distribution of the article, Lorillard Inc. "shares jumped," according to a report in The Wall Street Journal.

As the stock market opened on Monday, June 13, Lorillard stock stood at $100 per share. Tuesday afternoon--the day the CSP story ran--the stock peaked near $114. Friday morning, the stock was trading at $112 per share.

The TPSAC report, issued in March, had concluded that the "removal of menthol cigarettes from the marketplace would benefit public health in the United States."

Analysts, such as Christopher Collins and Wesley Moutrie II of Chicago-based Fitch Ratings in a recent report, considered the conclusion "less than damning," because it "stopped short of recommending restrictions," but were concerned about what proposed changes to the report could mean.

Kara Henschel, spokesperson for the FDA, confirmed for CSP Daily News companion publication Tobacco E-News that the changes do not affect either the conclusion or the recommendation of the report.

"There were editorial changes proposed to the TPSAC Menthol Report submitted between the March 18, 2011, meeting and March 23, 2011. The conclusions have not changed," she said.

As an example of the changes, the word "generally" was added to the following sentence: "For the purposes of the present report, TPSAC is concerned generally with counterfactual scenarios in which menthol cigarettes never existed."

Other changes included changing an "of" to "by," adding "School of Medicine" to "Stanford University" and changing a "could" to "would."

The FDA Center for Tobacco Products is slated to provide a progress report on its review of menthol this week.

Click here to see the annotated version of the report. 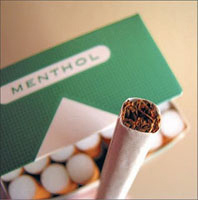