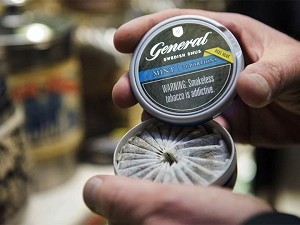 “If the decision had been made, we wouldn’t still be hearing from CTP,” he said, pointing out that he’s had multiple calls with the U.S. Food and Drug Administration's (FDA) Center for Tobacco Products (CTP) since the TPSAC meeting. “We’re continuing on with the process.”

In an exclusive interview with CSP/Tobacco E-News, Solyst shared his experience at the TPSAC meeting and how the company is moving forward on modified risk.

On the Panel’s Understanding of Snus:

“I was disappointed that, on the first day, the committee did not seem to understand the unique features of General Snus,” said Solyst. “There is an abundance of human health evidence, and it is manufactured following the GOTHIATEK standard (Swedish Match’s internal quality standards).”

Solyst believes the committee ultimately understood more about the product (particularly after a second day presentation on GOTHIATEK); however, many TPSAC members were not swayed by the evidence presented in support of snus.

On Positive Aspects of the Experience:

“I would not say it was all doom and gloom,” Solyst said of the meeting, despite the panel’s decision. “It was a good communication opportunity. I think TPSAC did have a better understanding of our product at the end of the two days than at the beginning [and] I’d say both Swedish Match and CTP have learned quite a bit.”

Another major benefit for Swedish Match: positive attention for its pioneering efforts.

“At the end of the TPSAC meeting, (CTP director) Mitch Zeller referred to us as ‘trailblazers,’ ” he said, adding that it’s a term the CTP has used frequently when describing Swedish Match.

At this year’s NATO Show, Zeller was quick to point out that “federal committees like TPSAC serve an advisory function; they are not the decision makers,” a fact Solyst brings up when people equate the TPSAC ruling to a final decision from the FDA.

“It’s certainly not unusual for an FDA center to not take the advice of an advisory committee,” he said. “There are many precedents.”

As such, Solyst remains hopeful that the CTP will ultimately approve some, if not all, of the requests in the MRTP application.

“One option would be that CTP gives us the MRTP order, but not give us all of the warning-label changes,” said Solyst. “That’s still a very positive development. They can’t give us the MRTP order unless we’ve demonstrated that (snus) reduces individual risk and it benefits the health of the overall population. That’s a significant statement.”

Broader Implications of the Snus Decision