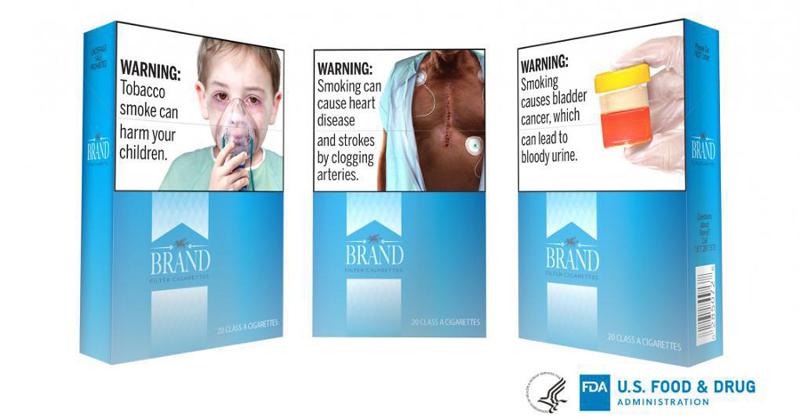 Photograph courtesy of the U.S. Food and Drug Administration

In a March 17 announcement, the FDA said it had issued its final rule to require new health warnings on cigarette packages and in cigarette advertisements. The 11 separate warnings feature “textual statements with photo-realistic color images depicting some of the lesser-known but serious health risks of cigarette smoking, including impact to fetal growth, cardiac disease, diabetes and more.”

“The 11 finalized cigarette health warnings represent the most significant change to cigarette labels in more than 35 years,” said Mitch Zeller, director of the FDA’s Center for Tobacco Products. “Research shows that the current warnings on cigarettes, which have not changed since 1984, have become virtually invisible to both smokers and nonsmokers, in part because of their small size, location and lack of an image.”

Research shows substantial gaps remain in the public’s knowledge of the harms of cigarette smoking, he said, and smokers have misinformation about cigarettes and their negative health effects.

As the FDA outlined in the proposed rule issued last year, the agency said it undertook a science-based approach to develop and evaluate the new cigarette health warnings. Here is the text for the new warnings:

In addition, the FDA has issued a guidance document called Required Warnings for Cigarette Packages and Advertisements: Small Entity Compliance Guide to help small businesses understand and comply with the final rule, the agency said.

[Editor’s note: On April 3, several tobacco companies filed a lawsuit against the FDA seeking to invalidate the new warning labels.]