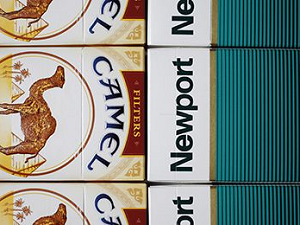 “The 0.8% decline is encouraging, after we saw volume declines accelerate slightly the last four-week period, down 1.4%,” Azer wrote in a research note.

Dollar sales increased 1.8%, which Azer described as “a slight deceleration from the 12-week trend of 1.9% growth, but an improvement from last (month’s) 1.2% growth.”

“Given the continued favorable trends seen from Nielsen data, we are encouraged heading into (Reynolds) and (Altria’s) earnings next week,” Azer continued.

Reynolds American Inc., Winston-Salem, N.C., led the pack in terms of unit and dollar sales: the company’s unit share grew to 32.4% (a 0.3% increase) and its dollar share climbed to 33.1% (also a 0.3% increase). Azer noted the gains came primarily from the Newport, Camel and National American Spirit brands.

The new big player in the United States, Imperial Tobacco Group PLC, Greensboro, N.C., saw decreases to both its unit and dollar shares: volumes fell 0.3% (to 7.9%) with its newly acquired Winston and Salem brands losing each losing 0.1% share and its dollar share decreased by 0.4%.

Trends were more mixed in the e-vapor category.

“The e-cig category's dollar sales grew 1.4% (year-over-year) in the period, a deceleration from the 12-week trend of 15.3% growth, as we anniversary the beginning of Vuse and MarkTen's national launches,” wrote Azer. “Volumes grew a more robust 25.7%, compared to the 12-week trend of 46.7% growth.”

“(Year-over-year) growth continues to be fueled by the national launches of Vuse and MarkTen, as dollar sales and volumes fell 23.5% and 19.3%, respectively, excluding the two brands,” Azer said.

Nielsen: Cigarette Sales Soften in May

Cigarettes: ‘Flat Is the New Up’