MIAMI -- Orange Bowl officials said that they have scrapped a planned sponsorship deal with Camacho Cigars, reported the Associated Press. Orange Bowl spokesperson Larry Wahl told the news agency that after mutual review, it was determined that it would not be appropriate to go forward with the sponsorship. 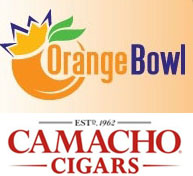 Earlier this month, Pinellas Park, Fla.-based Davidoff of Geneva and the Orange Bowl Committee announced a new three-year agreement that would have made Camacho Cigars a corporate sponsor of the Orange Bowl Festival, which included the 2012, 2013 and 2014 Discover Orange Bowls and 2013 Discover BCS National Championship.

The sponsorship included a large presence at several game-day events at Sun Life Stadium leading up to the 2012-2014 Discover Orange Bowls and 2013 Discover BCS National Championship. Football fans, VIPs and Committee members would have had access to onsite Camacho lounges where premium cigars could be enjoyed throughout the day. At the Orange Bowl Game Day Fan Zone, the Orange Bowl's largest pregame event, guests could relax before kickoff in the Camacho Club Lounge. There would also have been two cigar lounges located in the designated smoking areas of the stadium on the Club Level for attendees of the Orange Bowl VIP pregame party.

Last week, the Campaign for Tobacco-Free Kids, the American Cancer Society and eight other groups sent a letter (click here to view the full text of the letter) to game organizers and officials with the collegiate athletic group that raised concerns over the deal.

"The association of cigar smoking with one of the nation's top collegiate sporting events sends the wrong message to impressionable young fans and helps market cigars as athletic, masculine and cool," the groups wrote in the letter. "Linking tobacco use to sports also downplays the serious health risks of tobacco products."

In the letter, the groups said that the cigar company sponsorship conflicts with NCAA rules that forbid student-athletes and all game personnel from using tobacco in any form at practice or in competitions.

"Tobacco has no place in sports, and the promotion of cigars at the Orange Bowl sends the wrong message to young fans," the senators wrote (click here to view the full text of the letter). "A tobacco company's sponsorship of the Orange Bowl undermines a premier collegiate sporting event and promotes tobacco use to young fans, putting them at risk of developing an addictive and dangerous habit. Furthermore, Camacho Cigars' sponsorship is at odds with the NCAA rules prohibiting tobacco use by student athletes and all game personnel in any form at practice and in competitions."

This season's Orange Bowl is scheduled for Wednesday, January 4 in Miami, where No. 23 West Virginia will play No. 14 Clemson.

Founded in 1961 by Simon Camacho, Camacho Cigars was acquired by the Eiroa family in 1995. Now part of the Oettinger Davidoff Group, Camacho Cigars is one of the key players in the international cigar market. The flagship Camacho brand, made at Rancho Jamastran in Danli, Honduras, is comprised of 11 premium and super-premium line extensions: Super-Premium  (Diploma, 10th Anniversary Corojo, Liberty Series, Triple Maduro, Select), Premium (Corojo, Connecticut, Coyolar, Havana, SLR and Room101). Camacho Cigars also has seven core brands, including Baccarat The Game.