HARRISBURG, Pa. -- The Pennsylvania House Appropriations Committee has approved a $31.5 billion state budget that raises taxes on cigarettes from $1.60 per pack to $2.60 per pack, Trib Live reports. According to the Federal Tax Administration, the $1 increase would take Pennsylvania from the 23rd highest tobacco tax in the country to the 10th. 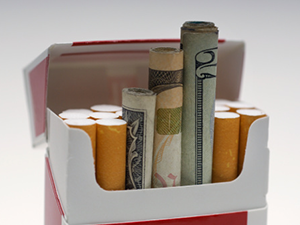 "We're paying $7 per pack now for cigarettes and the money is supposed to go toward roads and schools and stuff like that," a Pennsylvania resident told WNEP News 16. “It doesn't go there. I don't know where it goes, but we'll be up to $8 a pack, which would be kind of crazy.”

The proposed budget also would increase the tax on smokeless tobacco products, but not on cigars.

The full House is expected to vote on the package this week. Though Senate Republicans and Gov. Tom Wolf (D) have not agreed to the budget, the House Appropriations Committee approval marks an important step in avoiding last year’s nine-month budget impasse between Wolf and the Republican House and Senate.

“The governor looks forward to continuing to work with the legislature, and as the budget moves through the process, he is hopeful all sides can reach an agreement that achieves these goals,” said Jeff Sheridan, Wolf's spokesman.

The deadline for both sides to pass a state budget, which could include the cigarette and smokeless tax increase, is Thursday at midnight.