SIDNEY, Australia -- Tobacco giant Philip Morris is suing the Australian government over a new law making plain packaging mandatory for cigarettes beginning in December 2012, according to a report from the BBC. 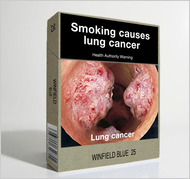 Australia's parliament has passed legislation that means all tobacco products will need to be sold in plain olive-brown packets with graphic health warnings not unlike those moving forward in the United States.

While those in Australia’ parliament praised the law as "one of the most momentous public health measures in Australia's history," Philip Morris Asia said the move breached a bilateral investment treaty, according to the report.

It said it had served a notice of arbitration under Australia's Bilateral Investment Treaty with Hong Kong.

PMA is arguing that removing its trademarks from tobacco packaging will cut its profits and see fake brands flood the market.

Spokesperson Anne Edwards said: "The government has passed this legislation despite being unable to demonstrate that it will be effective at reducing smoking and has ignored the widespread concerns raised in Australia and internationally regarding the serious legal issues associated with plain packaging."

PMA said it wanted the legislation to be suspended. It said it would ask for compensation for the billions of dollars it said the new law would cost it.

A spokesman for Altria noted that Philip Morris in the U.S. and Philip Morris in Australia are completely different entities. He also noted major difference between the Australia law (plain packaging, generic typeface) when compared to the current graphic health warnings being considered for cigarette packaging in the United States. However, he told CSP Daily News, "If a similar proposal were to happen here in the United States, we would raise constitutional issues."

Under the new law, the only thing distinguishing tobacco brands on packets will be the brand and product name in a standard color, position, font size and style.

A Guide for new Cigarette Packaging